ANR Founder Banned From Facebook for Offering $150,000 Reward for Any Information That Leads to the Arrest of Any State Premier, Goes After Mark McGowan and Reminds Him the Gallows Await Those Who Commit Crimes Against Humanity

ANR Founder Banned From Facebook for Offering $150,000 Reward for Any Information That Leads to the Arrest of Any State Premier, Goes After Mark McGowan and Reminds Him the Gallows Await Those Who Commit Crimes Against Humanity

Deranged – it’s you deranged Premiers that are going to the gallows. I think it’s very Australian, and sends a very clear message to Premiers,- continue to be Globalists minnions and puppets, and Pfizer State sales managers and not represent your state citizens, and commit crimes against humanity, and the Gallows is where you’re likely to end up. What do you think the parents who find out too late they took their kidto to vaccinate them leads to their death or serious injuries, ( heart attacks aren’t a mild health problem as you like to now suggest) because they were tricked and conned by you State Premiers into taking an experimental drug disguised as a quackzinne with the side effect of death. For a “ virus created in a computer by computer-generated genome sequencing and decided upon by political consensus which is also known as a scientific and political fraud. For a virus in a court of law, you Premier can’t even show evidence exists. ANR has offered $1 million for some time now for proof of a single death by Covid – so if it’s isn’t a conspiracy dickhead Premiers – proof it exists. But you can’t – you just continue the lie there are cases when there is no test kit that can detect Covid – and Covid vaccine deaths are counted as Covid deaths to deceive a less and less gullible and naive public.
So the $150,000 reward for any information sent into Australian National Review that leads to the arrest and jailing of any Premier still stands.
You guys are the virus. Stop the bs conspiracy theories we have a Global Pandemic and need a rushed-to-market, unproven, unnecessary, ineffective, dangerous, and deadly experimental drug to save us. My grandma used to use chicken soup for the flu. Man up pussy boy McGowan. The gallows are coming we have the evidence of your crimes and we are going to take every one of you dodgy f… down. ANR www.anrnews.com News media refusing Government and Pfizer money to push the global conspiracy theory we have a pandemic, and refuses to sell out Australians, and won’t stop to every Premier and Politician supporting this fraud is in jail, and the Globalists wealth is confiscated. Bring it on. The charade and fraud are up. 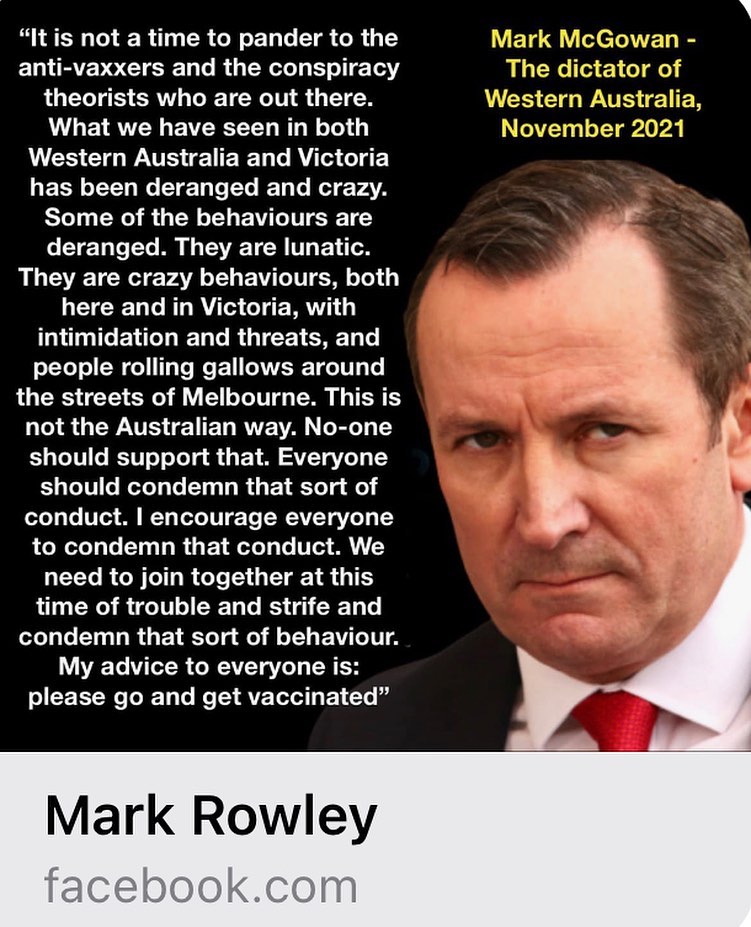 sarstanford
Precisely! You take the words from my mouth every single time!

patgoddard1946
Sharyn7, no they are exempt, what a joke and still there are men and women who can’t see it, the truth that is.

truthfinder68_
This f$&kwit needs to go!!! What is wrong in WA when they vote for a despot???

patgoddard1946
There is nothing I could add Jamie, basically covers it thankyou for spreading the truth of how it is in our world today. We have it covered and they are in panic mode, a dangerous place to be…eyes wide open.

villalashes_sunsetlise
Calling front line workers ‘whacko troublemakers’ is Un-Australian.
Saying he ‘pays them no attention’ is Un-Australian.
Watching young ppl present with life-changing injuries and fobbing them off as liars is un-Australian.
Not caring about the people he’s supposed to represent is Un-Australian.
FORCING A MEDICAL TREATMENT ON AUSTRALIAN’S is Un-Australian.
When thousands of medical staff are walking out rather than having this shot… people need to start questioning this Premier on his mandates. They are not village idiots like you’re making them out to be McGowan! You’re the disgrace, not them.

anti_tyranny2
Well written. He’s about to see a whole lotta crazy on Saturday. My advice is to go and get f***ed.

PrevPreviousSmart Water in NSW Country Towns, Where Else? Smart Resilient, You Pick the Word?
NextThis Mandatory Injection Was Planned in 2015 by the C0VID RICO CONSPIRATORSNext