His response raises red flags and what does this say about his character, not to mention his willingness, to take political cheap shots at key leaders in the Freedom Movement we need to win Government, that he sees as political competitors.

An audience member recently asked the question to Ricardo Bosi – who are the pedophile protectors, and can you be very clear who is?

Bosi’s response makes it appear a wide range of people are, including anyone that isn’t speaking out about it particularly his main political rival in Craig Kelly and Clive Palmer and even activists Triccy according to Bosi’s aggressive and uncalled for response?

Yet to be clear

When Clive Palmer addressed the protest rally in Brisbane, about this

He stated, to paraphrase,  that this issue, as many are equally important, but if we get off on tangents, and don’t get political power,  to change things by winning the election,  then nothing will change. If we get political power, then these issues can be better addressed.

Triccy told the crowd also, to paraphrase, “to stop just focusing on just one  issue, and let Clive Palmer answer the questions  being asked, which Clive did – no politicians for any major party in Australia would answer open questions to a large audience, some hostile and aggressively fringe elements, being only a small % hostile due to their obsessive single issue – ( his speech is running on YouTube, as an ad for the United Australia Party for those wanting to see it. )

Is it not correct that, unless we i.e. the resistance  – freedom movement, gain political power, then we can talk all we like about single issues, but nothing will change, as much as gaining political power,  to investigate and clean this important issue up.

If we have a billionaire, willing to back the movement, to help stop the left-wing billionaire elite Globalists, pushing Global Communism,  and deadly medical experimental drugs, that are killing and injuring on mass, should we not be willing to at least listen.

Not to mention be grateful he is in our side, not the enemies side.

Understandably people can be skeptical but cynicism isn’t skepticism but the mark of a loser.

Bosi is simply plain wrong to say “Triccy or Craig Kelly are pedophile protectors, for not speaking out when that’s simply not the case”

When it’s not true that they haven’t spoken out about this and many other issues.

Its very important that who is alledged to be a pedophile, and a pedophile protector, is made very clear as not to involve innocent parties.

Bosi also is a political competitor of Craig Kelly and Palmer, and to use this as a way to gain political advantage is somewhat questionable.

It’s not necessary and Bosi needs to explain his motive or divide the freedom movement and ensure its defeat at the Federal Election.

To aggressively respond and not to answer a fair question, calmly, raises questions about Bosi’s leadership ability.

He no doubt can serve a valuable role in the resistance, and has a lot of support, but to be leader if not of a new Government, he is not that material yet.

Cleaning up pedophiles with his military background certainly, but not of he continues to suggest we hang politicians and win a lottery to who pulls the lever. That will only be used against the entire movement as fringe right-wing extremists.

Also whether people like, Craig Kelly, or Clive Palmer, is irrelevant, as it isn’t a personality contest.

Come the Federal Election, most likely in May, only one party between Ricardo’s Party and United Australia Party can be voted for.

Only one has a potential chance to form a coalition of minor parties, and the funding to bankroll such an exercise to form Government,- that’s the United Australia Party working with others – so calling serious players in the movement, who many support” pedophile protectors “- amongst other things, such as nonsensical things as “ controlled opposition, with no evidence, isn’t helpful. Especially when Palmer couldn’t be controlled by anyone, – he is in battles with the Australian Government,- and took on China and won,- he earns $600 m plus a year in royalties, – so how could he be controlled by whom – the billionaire elites he chose not to be part of ?”

The defaming by Bosi is undermining the credibility of the movement and himself.

Its selfish and serves no purpose, but to destroy any chance of a new coalition Government, to boot Labor and liberals, and serves only Bosi to steal support from United Australia Party to vote for whom?

As they can’t even vote for Bosi’s party.

So who is Bosi going to tell people to vote for at the upcoming election?

Or are we meant to sit idle and wait for the White Knights to magically come and save us?

Live in hope and die in desperation.

But unless Ricardo Bosi apologises to those he has wrongly accused, stops dividing the resistance, can show leadership qualities such as being a team player, for the greater good and cause, then we have serious questions over his role in this movement – one he wants to all follow him it appears, to an empty ballot paper, and wear a white hat.

Governments don’t fall by dividing the resistance, and defaming the people who a large majority support, based on baseless allegations. That’s cheap nasty politics which we are all over.

ANR is independent, and wants to see a United front in the resistance.

On Feb 12th, the Canberra Protest Rally success, happened because of teamwork, and good people and large number of groups working together.

Ricardo Bosi wasn’t involved due to his defaming of the group.

He held a rally at Canberra on Feb 19 th and continued to defame the resistance.

But the crowd was a fraction of last weekend, and no speakers representing any groups, only Bosi, representing a Party no one can vote for, and a movement, if Bosi doesn’t change tact, will ensure the resistance can’t defeat the Labor or the Coalition, and take our country back politically.  With Palmer’s backing, it is still a long shot but a possibility.

The resistance movement needs to quickly decide, do they support childish personality politics, or is mature enough to see when so-called leaders are stating things to serve their selfish interests, that are destructive to the greater movement and greater good.

United we stand, divided we fall.

If Bosi can’t apologise, and become part of a United movement to win, then he might as well tell people who can’t vote for his party, many who will rock up on Election Day looking to do so, only to leave confused and misled, to vote Labour, Liberal or Greens, as his pathway at the moment, is only ensuring that occurs.

By his consistent attempts to defame and destroy the resistance- who the rest of the resistance has largely kept their egos aside to work together, and achieved the powerful results in Canberra Feb 12th that could well have been the tipping point that wins this for Australia.

This is a long game – focus on the real enemy Bosi, and not on who you see as your Political competitors with cheap political shots.

You have a lot to add to the resistance and a lot of people support you.

Your either are on the resistance team, or run your own niche show if being a team player is beyond you, which will only continue to divide and destroy the movement – and prove you aren’t leadership material, even if by miracle some white knight does save our arses.

How can you achieve your goals in unison, not against the majority of the resistance, as it will take more and more groups working together to win power, and even to restore democracy.

There is a lot to be done and ANR as independent media will tell it how it is free of commercial bias. Some won’t agree which is fine

That’s what political opinion and commentary should be about

To provoke healthy civil debate – the makings of a better society. 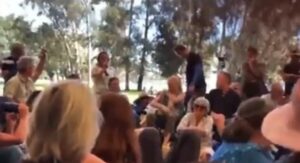 PrevPreviousANR Founder Discusses Dangerous Western Propaganda, Governments, and MSM, Lying to Us Again About Russia, and Also China. He Suggests We Need a Government That’s Anti Globalists, in Australia
Next2017- Harvard University – JFK School of GovernmentNext