So that’s the reason is it – not because discrimination is illegal and unconstitutional, and the fraud of Covid is only pushed by those such as yourselves who take money to lie, (and fail to disclose your conflict) we have a pandemic and to pressure innocents, to be jabbed by an experimental drug disguised as a quackzinne with the side effect of death. 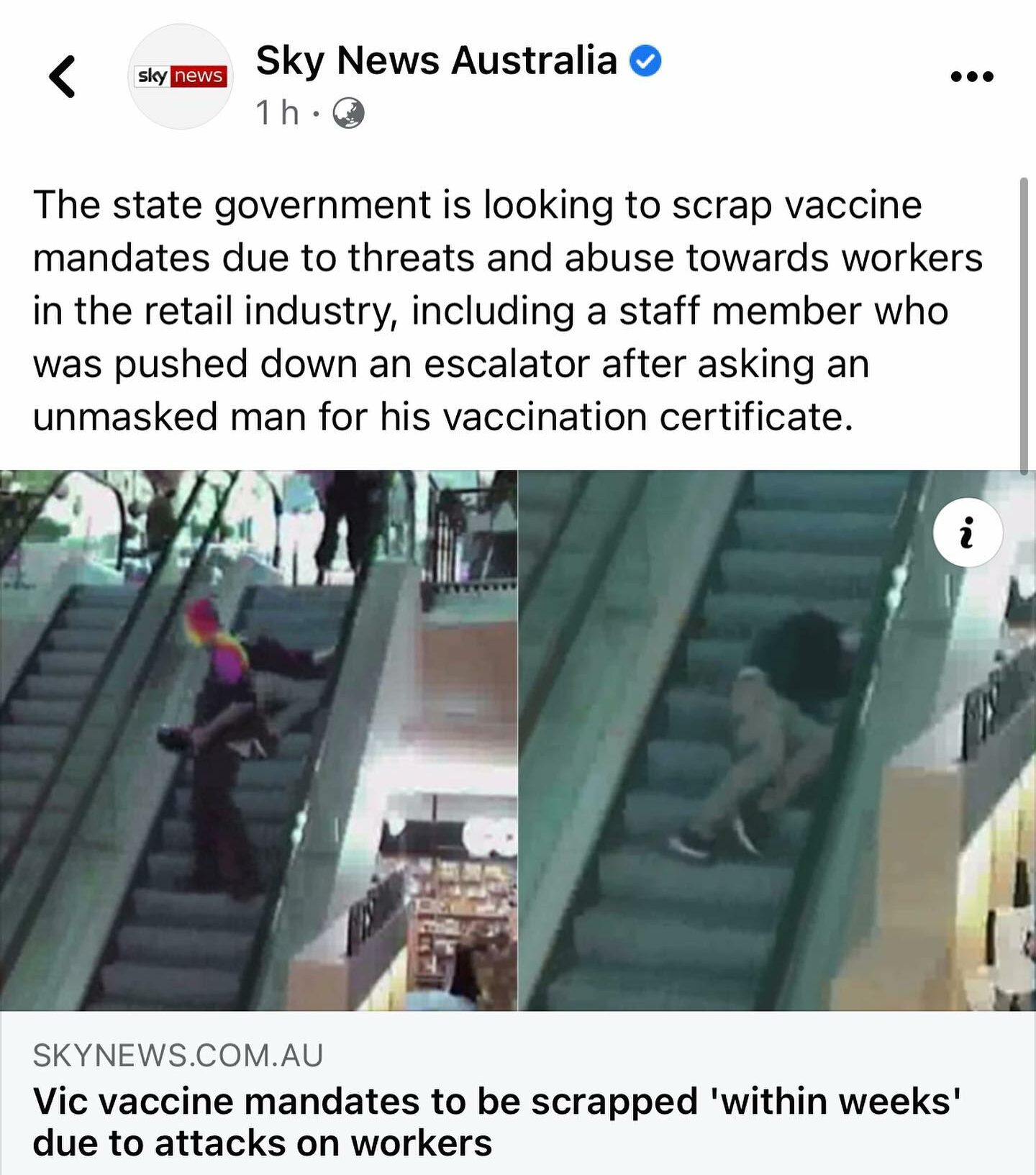 The state government is looking to scrap vaccine mandates due to threats and abuse towards workers in the retail industry, including a staff member who was allegedly pushed down an escalator after asking an unmasked man for his vaccination certificate.

The controversial coronavirus vaccination mandates in Victoria could be scrapped in the New Year as concerns rise over abuse towards retail workers who have to enforce the rules on shoppers.

The state government is looking at removing the directive in all but high-risk settings as early as January, according to the Herald Sun.

In October, Premier Daniel Andrews suggested the mandate could be in place till April or even longer due to a spike in COVID-19 cases at the time.

Government officials said a series of incidents of workers being abused for enforcing the jab mandate has led them to reconsider their approach.

“The high rate of vaccinations, the passing of the pandemic bills which sidelines the chief health officers, and the high-profile incidents of violence have led to a change of thinking,” a source told the publication.

“There will still be mandates in place in high-risk settings even after any change.” 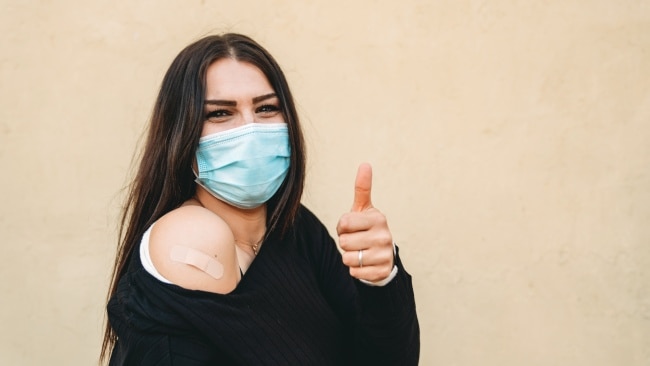 Vaccination mandates in Victoria could be scrapped by January after a number of incidents against workers in the retail industry.

In one case, a Melbourne bookstore has been forced to hire private security guards, at a cost of $4,000 a week, over attacks on staff members.

Victoria Police are investigating an incident where a Dymocks employee was allegedly pushed down an escalator after he reportedly asked a customer to prove his vaccination status and to check-in to the store.

CCTV footage showed the staff member try and stop the man, wearing a distinctive rainbow hoodie, from going down the escalator to the book store before he was pushed with his head hitting a step.

The worker is seen clutching his head as he laid motionless on the moving escalator.

A bystander pushed the emergency stop button as other Good Samaritans rushed to his aid. It’s believed he was treated for a mild concussion.

The man who pushed the staff member is seen going back up the escalator seconds later. 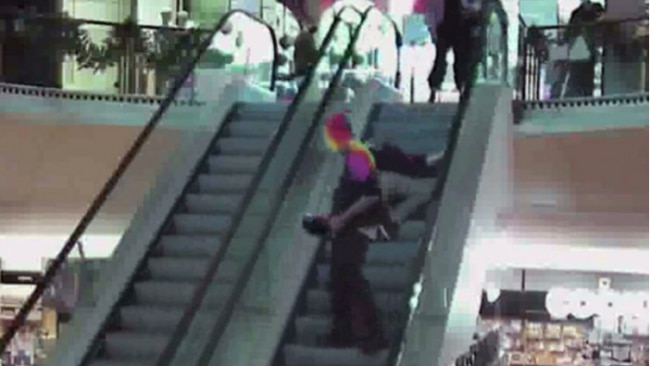 A man pushed a Dymocks worker for refusing to check-in to the store and show his vaccination status in Melbourne. 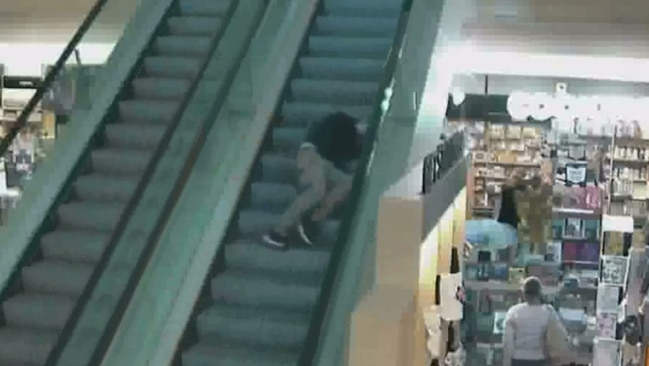 The staff member is believed to have suffered a mild concussion after the assault.

The owner of the store said it was the third incident linked to COVID-19 requirements at the store last Friday.

Other incidents include an elderly woman slapped a female employee and a middle-aged businessman shoved past a male staff member at the QR check-in area.

“We’ve owned this book shop for 20 years and we’ve never had a physical assault against any staff member, but we had three in one day,” Melissa Traderso told ABC Radio Melbourne.

“Just have some respect for these poor, innocent people who are just doing their job.”

Unvaccinated shoppers were banned from entering non-essential venues on November 26 despite previously being allowed.

There are concerns from health officials some Victorians were reluctant to take the booster shot.

The government will reportedly seek advice from the Australian Technical Advisory Group on Immunisation regarding the third jab.

Mr Andrews said this week he was hoping to remove mandates “as quickly as possible” with the state already achieving high vaccination rates.

“But they’re based on health advice and we will continue to follow health advice,” he said during a press conference.

Victoria recorded nine deaths related to coronavirus with 1,365 cases in the 24 hours to midnight on Saturday.

Just over 93 per cent of Victorians have received one dose of a coronavirus vaccine and 91.1 per cent are fully vaxxinated.

John Harris
when I can walk into a supermarket, then a crowed Australia Post, then leave and enter a chemist full of people, then walk out of there into a shop next door like a JB HIFI, Supercheap auto etc and be stopped at the door and asked for my ‘papers please’ and told I can’t come in you know this has nothing to do with the virus, it is all about punishing people, I have reported a few businesses to the ‘The Global Economic Forum’ hopefully the email they were sent actually had some effect.

Sharon Michael
We do not have loud enough voices in Victoria to fight for us. Everyone seems to be in Queensland! Come on Victorians!

Bronte Banks
To be honest this is what I feel like doing to anyone who believes all this crap.

John Harris
More of leftist Zuckerberg’s censoring, he finds the term, ‘gate to tyranny’ hate speech / false information or what ever, had to put a line through this so it doesn’t trigger his automatic ‘hate speech sensors…….Or was it that I said Each way Albo will be worse? 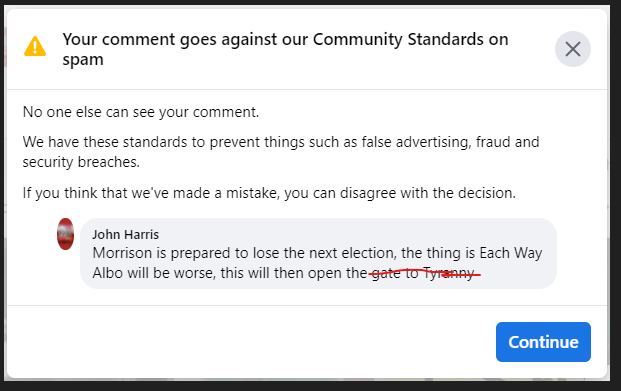 Brian Gordon
If they r trying to kill everyone why would this bother them?

Vagg Bakalakis
We gotta be cruel to be kind.

Dani Harris
This is the exact reason why anarchy exists. And mass non compliance.