President of the Indian Public Health Association, Dr Sanjay K Rai, commented that the data from countries that have already started vaccinating children ought to be examined before a decision is made.

For children between the ages of 15 to 18, the vaccination against COVID-19 is set to begin from January 3rd, announced Prime Minister Narendra Modi on Saturday night.

He said this would aid to lower the fear around children attending school and university and strengthen the fight against the pandemic. The move would likely also help normalize teaching in schools, he went on to add.

“I am a great fan of PM Modi for his selfless service to nation and taking right decisions at right time. But I am completely disappointed with his unscientific decision on children vaccination,” wrote Rai in a tweet that tagged the Prime Minister’s Office.

According to Rai’s perspective, there should be a specific goal for every intervention. The aim is to prevent the COVID infection or severity or death.

“But according to whatever knowledge we have about vaccines, they are unable to make a significant dent in the infection. In some countries, people are getting infected even after taking booster shots.

“Also, 50,000 breakthrough infections are being reported per day in the UK. So this proves that vaccination is not preventing coronavirus infection but vaccines are effective in preventing severity and death,” Rai told PTI.

According to him, the mortality rate for a susceptible population amounts to 1.5%, which translates to just over 15,000 deaths per million.

Rai said the serious side effects after vaccination are 10 to 15 per million people.

“So, if you do the risk and benefit analysis in adults, it is a huge benefit,” he said.

In children, the severity of the infection is extremely low and according to official figures available in the public domain, only two deaths per million have seen itself being reported to date.

“In this section (children), 15,000 (people) are not dying and keeping in mind the adverse effects also, if you do the risk and benefit analysis, then the risk is more than the benefits based on the available data,” Rai explained.

“Both the objectives are not being fulfilled by initiating vaccination among children,” he said.

Quite a few countries, which includes the likes of US, have taken the initiative of vaccinating their children 4-5 months ago. He said the data from these countries should be analyzed before vaccination of children against COVID begins.

Meanwhile, a Canadian doctor who was expelled for administering ivermectin to patients suffering from COVID-19 has warned that mRNA COVID vaccines can keep creating spike proteins forever by permanently altering kids DNA.

Children are particularly prone to DNA alteration because they have higher levels of reverse transcriptase than adults, said Dr. Daniel Nagase.

COVID vaccines are “irreversible and potentially permanently damaging,” says Dr. Robert Malone, who explained why 16,000 physicians and medical scientists around the world signed a declaration publicly declaring healthy children should not be vaccinated for COVID-19.

According to a disturbing new study, social distancing, facemaks and other such COVID rules are responsible for causing a 23% decline in children’s cognitive abilities. The study also found a similar reduction in the development of children’s communication skills, both verbal and nonverbal.

Recently, a fully vaccinated mom gave birth to a baby bleeding from mouth and nose according to VAERS report. The baby died a day after birth. The infant’s father stated his open suspicion that the vaccine was related to the death.

There are numerous infant and child deaths after COVID vaccination reported according to VAERS data.

A major Japanese medical bulletin study has warned that the risk of dying from the COVID-19 vaccine for people in their 20s maybe 40 times higher than the disease itself. 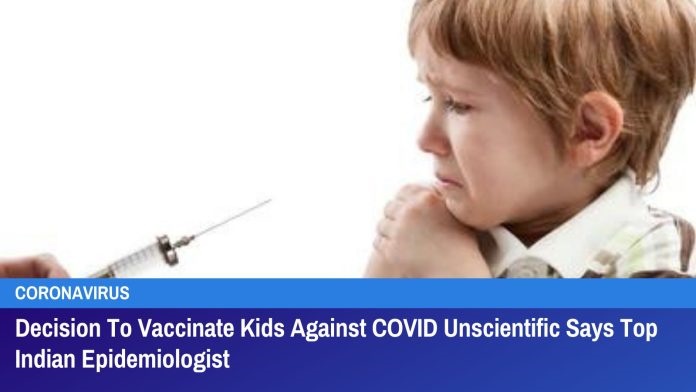