Scott Morrison was secretly sworn in as health minister, finance minister and resources minister during the Covid-19 pandemic in an extraordinary series of moves that are now being investigated by the new Labor government.

In early 2020, the then prime minister decided he wanted to share power with the existing health and finance ministers, Greg Hunt and Mathias Cormann, to prevent them wielding too much influence over the nation’s biosecurity laws and coffers during the crisis.

The plan was hatched with the approval of attorney-general Christian Porter, according to new book about the federal government’s handling of the pandemic titled Plagued.

Mr Morrison apparently told Mr Hunt: ‘I trust you, mate… but I’m swearing myself in as health minister, too.’

It has since been revealed that in April 2021 the former PM was sworn in as resources minister to prevent Keith Pitt from approving a huge oil and gas project off the Central Coast where Liberal members faced pressure from climate activists and teal independents.

A concerned Mr Pitt only found out in December when he wanted to move ahead with the project but the PM killed it.

The secretive moves were slammed by Prime Minister Anthony Albanese who is seeking advice as to whether the actions were legal.

‘This is quite extraordinary. Australians need a prime minister who is focused on the job that they’re given,’ he told reporters in Melbourne on Monday.

Mr Morrison told Sky News he did not wish to comment, adding: ‘I haven’t seen what he has said. Since leaving the job I haven’t engaged in any day to day politics’.

Explaining why Mr Morrison wanted to share power with the health and finance ministers, the book – written by journalists at The Australian – says he felt there ‘needed to be more checks and balances before any single minister could wield such powers’.

The health minister was in charge of shutting the nation’s borders and the finance minister was overseeing the largest fiscal stimulus in Australia’s history.

The powers could not be delegated to Cabinet so Mr Morrison ‘then hatched a radical and until now secret plan with Porter’s approval.’

Mr Hunt was aware of the decision and Mr Morrison, Mr Hunt and Mr Porter felt the move safeguarded ‘against any one minister having absolute power.’

During a press conference on Monday, Mr Albanese hit out at his predecessor.

‘The people of Australia were kept in the dark as to what the ministerial arrangements were. It’s completely unacceptable,’ he said.

‘There’s an absolute need for clear transparency. These circumstances should never have arisen.

‘You know, we do have a non-presidential system of government in this country – but what we had from Scott Morrison is a centralisation of power, is overriding of ministerial decisions, and all done in secret.’

Government Services Minister Bill Shorten said the move was ‘weird’ and accused Mr Morrison – an evangelical Christian – of having a ‘messianic’ complex.

‘He was ghosting his own cabinet ministers, he was off on a trip. I don’t know if it’s some messianic complex or if he thought he was the Australian version of Kanye,’ Mr Shorten told ABC radio.

‘I don’t know what was going through his head. Why not tell people, why be secretive?

‘This is about the constitution, it’s about our whole system of government. You really need to have a good explanation and I haven’t heard one yet.’ 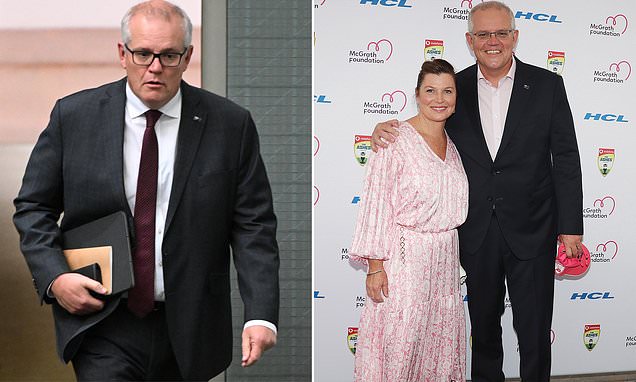