Iversen: Locking Down Unvaccinated-Only ‘Not About Science, It’s About Punishing People’

Iversen: Locking Down Unvaccinated-Only ‘Not About Science, It’s About Punishing People’

On the latest episode of The Hill’s “Rising,” journalist and political commentator Kim Iversen discussed strict lockdowns for the unvaccinated only in Austria, and the UK’s new policy requiring three shots as proof of being “fully vaccinated.”

On the latest episode of The Hill’s “Rising,” journalist and political commentator Kim Iversen broke down Austria’s COVID lockdown mandate for the unvaccinated.

She also discussed other recent developments in the world of lockdowns and booster policies, which she claimed “are not about science” but instead about “punishing people.”

In an attempt to stop the spread, Austria placed 2 million unvaccinated residents on lockdown, Iversen reported.

“As of Monday, any unvaccinated person over the age of 12 is now unable to do pretty much anything except the essentials, which is grocery shop, seek medical treatment and travel to and from school or work,” Iversen said.

The unvaccinated make up about 30% of the Austrian population, “so this is no small thing,” said Iversen.

“If Austrian’s want to go anywhere except those listed essentials they have to show proof of vaccination, and the government announced police would be roaming the streets and checking papers to ensure compliance.”

Videos of Austrian police roaming shopping centers and searching for unvaccinated residents have been widely shared on social media.

Iversen said Austria had already implemented a vaccine passport system similar to those in Los Angeles and New York City, so if people want to be admitted to anywhere except the essentials they need to show proof of vaccination.

To highlight the class element of this newly imposed medical segregation, Iversen referenced recent reporting by Freddie Sayers, an investigative journalist who traveled to Austria to interview supporters and opponents of the policy to lockdown the unvaccinated.

Sayers said they began their interviews “on one of the fancier shopping streets in the old town, full of Rolex and Karl Lagerfeld stores in which well-heeled locals lined up to express their support for the lockdown.”

In this part of town, Sayers said, “there is very little sympathy for a truculent minority that is seen as stupid and having brought it on themselves.”

On the same street, “if you approach the people wearing fluorescent vests, guarding the stores and making deliveries, you tend to get a different response. They are more reluctant to speak to us, but decidedly less supportive [of the restrictions]. ‘It is bullsh*t,’ was one man’s pithy response.”

Sayers said questions about the practical efficacy of such a measure don’t seem to be of much interest. “When I ask people if they know that vaccinated people can also contract and transmit COVID, they tend to brush it aside as a minor detail.”

“[Supporters of these measures] don’t understand people who are not taking the vaccine, they don’t like them, and they are slightly afraid of them — so the simplest thing is to remove them from society altogether,” Sayers reported.

“And I think that’s really the crux of it and what many people like myself have been fighting against. This isn’t about science, this is about punishing people you don’t understand and you don’t like.”

Iversen pointed to a New York Times article which reported the Austrian Chancellor Alexander Schallenberg ignored recommendations by his own Health Minister to implement more general restrictions that apply to both vaccinated and unvaccinated Austrians, like closing bars and restaurants. Instead, the chancellor implemented a strict lockdown on the unvaccinated only.

Iversen turned next to the UK.

“In the UK, Boris Johnson announced that unless you’ve had your booster dose, you’re no longer considered fully vaccinated. He also announced the UK might go into a lockdown after Christmas unless people get their booster doses,” she said. “And Israel has done something similar.”

“You cannot enter the country unless you can show proof of a booster dose,” Iversen said. “They also do not consider a person fully vaccinated on their COVID passports unless they’ve had three doses.”

Iversen said the UK and Israel are pushing for booster doses because they have seen even with high vaccination rates COVID still spreads.

“They don’t have the unvaccinated to blame, so now they blame the under-vaccinated, and what’s more is they don’t have any data to support the fact that a booster dose stops the spread of the virus.”

“None of this makes scientific sense to me,” she said. 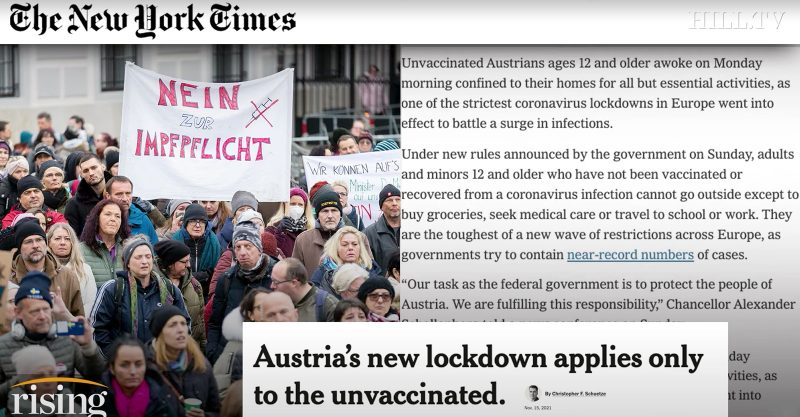