James Corbett: I Read Bill Gates’ New Book so You Wouldn’t Have To

James Corbett: I Read Bill Gates’ New Book so You Wouldn’t Have To

Journalist James Corbett read Bill Gates’ new book, “How to Prevent the Next Pandemic,” so you wouldn’t have to. He said it’s just as “infuriating” as you’d expect.

Journalist James Corbett read Bill Gates’ new book, “How to Prevent the Next Pandemic,” to save everyone else the trouble, he said.

In the 1-hour, 20-minute episode of “The Corbett Report,” Corbett — an expert on geopolitics and open-source journalism — analyzed the book chapter by chapter.

He found it “every bit as infuriating, nauseating, ridiculous, laughable and risible” as you would expect.

“Just when you thought you’d gotten rid of him, like a canker sore in the mouth of humanity, Bill Gates pops up yet again,” he said.

Not a scholarly or serious read, “How to Prevent the Next Pandemic” is written for the layperson who wants to virtue signal by being seen reading it — or displaying it on his coffee table, Corbett said.

“There is certainly nothing of scientific or medical value in here,” Corbett said. “There’s nothing even interesting here. It’s a baffling book even from a propagandistic perspective.”

The book is “ham-fisted,” even for Gates, Corbett said, “and everything BIll Gates does from a PR perspective is ham-fisted.”

Worse, Gates’ goal in writing the book is to disarm the public and prepare us to accept the agenda that Gates and his allies would like to impose on the world, Corbett claimed.

“Ultimately, what this is about is drumming up general public support — or at least general public understanding — of the unfolding biosecurity agenda,” he said.

Nothing new, nothing of value
In the book’s introduction, Gates claims he’s been the “target of wild conspiracy theories” throughout the COVID-19 pandemic.

Corbett pointed out that Gates sets up outlandish theories as straw men (such as the idea there’s a “tracking device” in each dose of the vaccine) and blows them down, rather than addressing real, thoughtful criticisms of the way the pandemic was handled.

Rather than look to existing ways to strengthen the human immune system against illness, Gates resorts to “patronizing and demeaning statements about anyone who looked at any other alternative ways of taking care of [their] body or health during this crisis other than what was officially approved by the [U.S. Food and Drug Administration] and the [World Health Organization],” said Corbett.

‘Stop reading and say ‘no, this is wrong’’

Gates also insists (in Chapter 7) that government agencies should engage in simulations of situations that may occur during future pandemics.

“Deep State predictive programming operations known as drills and exercises,” as Corbett described them, preceded the COVID-19 pandemic and included the Event 201 exercise, funded by the Bill & Melinda Gates Foundation, and a “wargame,” according to Corbett.

Gates writes that “conspiracy theorists” suggested the exercise was more a prediction than a drill.

“That the [Event 201] video sponsors are now some of the central actors in the real world crisis only amplifies the simulation’s significance.”

In addressing Gates’ assertion in Chapter 8 that poor countries became poorer due to the pandemic, Corbett pointed out it was the response to the pandemic by health authorities, not the pandemic itself, that pushed millions of people into extreme poverty.

“The assumptions are embedded at such a deep level that unless you stop reading and say ‘no, this is wrong,’ … it just gets completely threaded into the fabric of this narrative,” Corbett said.

In the book’s closing chapters and afterword, Gates calls for increasing and enhancing interventions in the name of public health, including reducing births and developing sophisticated artificial intelligence tools, all with the goal of “eradicating respiratory diseases.”

“I’m thinking that’s not going to happen without a lot of reengineering of the human species,” said Corbett.

Corbett examines each chapter of the book in detail in the video below: 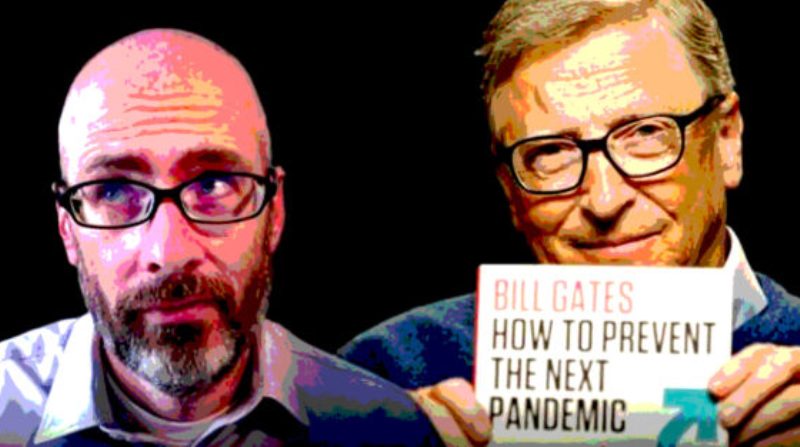