Meet Marsha Gee, a Former Top ICU Nurse at UCSD Who Is Today One of the Most C0VID-Vaxxine Injured People on Earth

Meet Marsha Gee, a Former Top ICU Nurse at UCSD Who Is Today One of the Most C0VID-Vaxxine Injured People on Earth

Marsha was selected to be one of the first people at UCSD to receive the COVID vaccine. Today, she is one of the most severely vaccine injured people on Earth and nobody wants to help her recover.

Marsha Gee used to be a happy, healthy 37-year-old ICU nurse working at UCSD without a care in the world. Her life was fantastic.

She was honored to be selected as one of the first people at UCSD to receive the COVID vaccine.

Big mistake. In less than an hour after her first Pfizer dose, her face was paralyzed.

But that was just the beginning.

After her injury, UCSD basically threw her under the bus, took the bus and ran her over multiple times, and then kicked her to the curb. That’s how she described it to me.

None of the UCSD doctors were willing to go to bat for her. No doctor will confirm that she was vaccine injured.

She never got any sympathy at any time from anyone in the hospital administration, ever. Only her close nurse friends supported her in her time of need.

Her opinion of the medical profession that she was a part of has now shifted 180 degrees.

That, in a nutshell, is her story.

I just finished writing a draft of a Substack article on surveying the vaccine injured which I pushed out for limited distribution before triggering an email push to all my followers.

I was looking at the survey results and noticed the most recent submission from Marsha Gee. I checked the symptom column and it looked like every possible symptom was checked including such rare events such as “bleeding behind eyes.”

Since there were slightly over 100 symptoms listed at the time, checking nearly all of them seemed impossible. So at first I was sure I was being gamed.

But the rest of the record looked legit and a quick Internet search and two phone calls later, it was clear that this was a legit entry.

In short, she is a one person anecdote that proves beyond any doubt that vaccine injuries are caused by the shot. There is simply no other viable explanation for what happened to her. But she’s hardly alone. Which makes the whole “we haven’t been able to determine causality” argument untenable (not that it ever was reasonable).

Today, Marsha Gee is one of the most COVID vaccine injured people on Earth. In other words, she has experienced a broader array of vaccine-associated symptoms than 98% of all vaccine injured (there was a second person in the first 100 with 75 symptoms checked).

It’s important for her story to be told.

The short story is that she was a dedicated worker. She was the first to admit a COVID patient in the ICU at UCSD. She was honored to be the first nurse at UCSD chosen to get the vaccine.

Her full story in her own words

I’m pro science, pro vaccine. I wish others would find their common sense that apparently has all been lost during this pandemic. In history, vaccines have adverse reactions… WHY NOW do you treat the vax injured like they are a horrible group for this community.. world!! What have doctors been threatened with that they cannot sit in a chair, look me in the eyes… and listen to my story. Why can they not see my whole life turned upside down on Dec 16, 2020. I lost my career… I LOST MY IDENTITY. And not one doctor has acknowledged this… or cares to try and study/research any of it.

UCSD’s reaction was to gaslight her

UCSD’s response even to this day is that the vaccines are perfectly safe and either she is imagining all these symptoms or that they are unrelated and caused by something else.

In other words, if you are perfectly fine, get a new vaccine, less than an hour later you develop the start of a cascade of more than 78 rare symptoms that are disabling, it couldn’t have been the vaccine.

They know this because the randomized trials proved the vaccine is safe and Pfizer would never lie or game the data. And if they did, the crackerjack team at the FDA would stop them in a heartbeat. Maddie de Garay’s case that proves clinical trial fraud? The FDA never investigated it (like they promised), so it doesn’t exist. No fraud.

Here are two articles that explain why medical professionals do this: 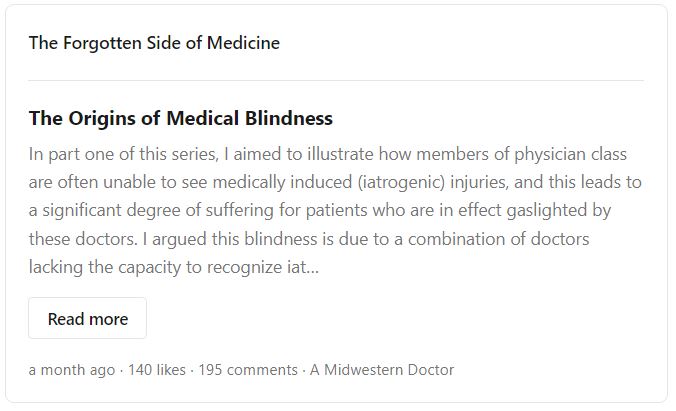 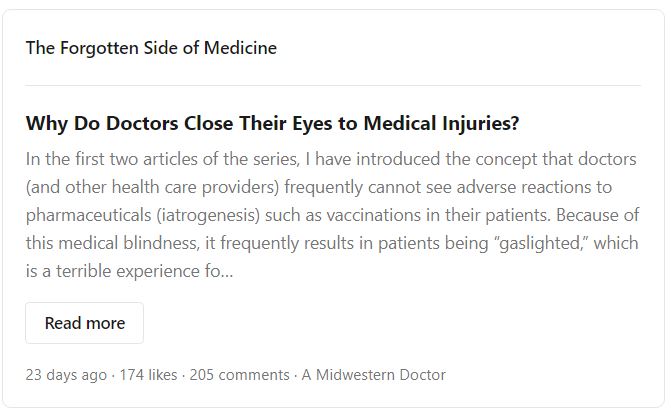 Here’s the link to the vaccine injury/death survey. If you haven’t already filled it out or shared it, this is a good time to do that. The vaccine injured will be grateful.