As the US is seeing record numbers of daily coronavirus cases driven by the highly transmissible Omicron variant, public health authorities nationwide have said that teens and younger adults are helping fuel this increase.

The uptick in Covid-19 among the under-50s coincides with a surge in cases among young children – and a troubling increase in pediatric hospitalizations.

A registered nurse administers a Covid test in Los Angeles, California.
US experts question whether counting Covid cases is still the right approach
Read more
The US seven-day average for pediatric hospitalizations increased 58%, to 334, between 21 December and 27 December. The increase in hospitalizations for all age groups was about 19%. Less than 25% of US children are vaccinated, Reuters reported.

In Los Angeles county, adults between 18 and 49 accounted for more than 70% of the coronavirus cases recorded between 22 December and 28 December, according to the Los Angeles Times. The case rate per 100,000 people has surged most quickly in that age range.

The county saw more than 27,000 new cases on 31 December, dramatically surpassing the winter 2021 daily case average of 16,000. About 25% of all coronaviruses tests in Los Angeles county are positive, according to the newspaper.

Broken down further, data show that infection rates in persons from 18 to 29 are more than eight times higher than one month ago. With adults in their 30s and 40s, there are six times as many cases.

“Many of the people in this age group are important members of our labor force … and these are also folks that are very likely to be out and about for recreation,” Barbara Ferrer, the county’s public health director, was quoted as saying.

“Often this age group doesn’t experience the worst consequences of increased transmission,” Ferrer continued. “And sometimes that’s made it more difficult for individuals to stay attentive to the need to be vigilant about adhering to all of the public health safety measures.”

There are concerns that the US economy and healthcare systems could suffer further in January not because of imposed restrictions such as lockdowns but because there is so much widespread sickness, including relatively mild cases, that staff shortages further hamper commerce and public services.

Meanwhile, the infection rate for children between ages five and 11 has doubled. In nearby Orange county, California, adults from age 18 to 44 are driving Covid infections, according to the Times’ report.

Coronavirus cases are increasing dramatically among teens and younger adults in southern Nevada. Eighteen to 24-year-olds saw 44.7 cases per 100,000 as of 24 December, an 131% increase from one week prior, the Las Vegas Review-Journal reported.

In Dallas county, Texas, coronavirus cases rose by 76% in one week, according to a 28 December report in the Dallas Morning News. Adults between 18 and 29 comprised almost 25% of these cases.

And in the last week of December, one Michigan hospital system reported a 21% increase in coronavirus cases among 21- to 35-year-olds, compared to the preceding week.

Michigan hospitals have also reported seeing more patients in younger age groups in December, many of whom are unvaccinated, according to ABC 12 News.

“This is also not by coincidence, an age group that remains under-vaccinated in a significant number,” Bob Riney, president of healthcare operations and chief operating officer at Henry Ford Health System, told ABC 12 News. “The vast majority of the Covid patients in our hospitals are unvaccinated.”

Allison Bartlett, who teaches about pediatric infectious diseases at the University of Chicago, told the station: “We are seeing twice as many kids in the hospital who are testing positive for Covid than we saw even back in our bad peak in September.”

“The risks of Covid-19 for children are real,” said Dr Mary T Bassett, acting state health commissioner. There was a fourfold increase in pediatric Covid-19 hospital admissions from the week of 5 December through the week of 24 December.

As case counts in younger demographics grow, officials are girding for yet another winter surge, though possibly a briefer one that previous surges.

Columbia University researchers have said that the US could hit its case peak by 9 January, at about 2.5m weekly cases. However, they said, that metric could hit as many as 5.4m, the New York Times reported. 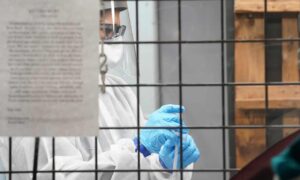