MELBOURNE, Australia — The Victorian government has opened its $800 million quarantine camp at Mickleham in Melbourne’s north. The government is claiming it will be used to replace hotels and become Victoria’s only quarantine site from April. It says the first cohort of “unvaccinated international travellers” has been checked in.

If there is one clear message from the behaviour of the Victorian government over the last two years, it is that nothing it says can be taken at face value. Either the quarantine camps are a waste of money or there is a darker motive.

As someone who has spent 22 days in prison for my beliefs, it is not a stretch of the imagination to think this facility (camp/prison) could soon be filled with people like me. Australia is trying to broaden the definition of ‘terrorism’ to include what they call anti-vaxxers. Will people like me call this home soon? I hope not.

The track record is extremely troubling. In some parts of Australia, especially the Northern Territory and Queensland, if the government determines from its heavy surveillance that someone has been in close contact with another who has tested positive for Covid, they can be forced into a quarantine camp. In Victoria, the police have been knocking on doors to tell people to isolate because they were near someone who tested positive.

Refusal to comply can incur up to a $5,000 fine. Break the rules in these camps, such as going beyond the balcony area, can get you another $5,000 fine. Hayley Hodgson, who was incarcerated in a Northern Territory camp despite showing no symptoms, explains that the aim is to intimidate. “You feel like you are in prison, you feel like you have done something wrong. It’s inhumane what they are doing. You are so small.”

There are the predictable blandishments from the Victorian government bureaucracy about the “the new hub [having] dedicated onsite services, including catering that is tailored to be delivered alongside strong infection control and prevention measures”. The truth is different. It is another step in the pattern of coercion that has been inflicted on the Victorian people. Robbing people of their natural rights has now become commonplace. All you need to do in return is provide suitable “onsite services” and functioning air conditioning.

It is noticeable that premier Daniel Andrews and his cabinet are now shifting the pattern of their lies as they seek to muddy the waters over their crimes. At first, they lied about the pandemic, calling anyone who tested positive to the discredited PCR kits a “case” even when over four fifths had no symptoms at all. That made no sense. If you had no symptoms, either the test was false or your immune system had dealt with it. Either way, you were not a ‘case’.

Next, no distinction was drawn between dying with covid and dying because of covid (as occurred in most countries elsewhere), a way of inflating the numbers. Yet even then, those numbers remained small in Australia. For most of the first half of 2021, ‘cases’, especially serious cases, were negligible.

Ever handy with convenient explanations, the government declared that this was because of its policies of lockdowns, curfews and masking – requiring more policies of lockdowns, curfews and masking. Yet if that were true, the whole thing should have been over by the middle of 2021. Instead, the case numbers and deaths have steadily risen and stayed higher. Even by their own dodgy measures, the policies manifestly failed.

The next step was to outrageously coerce people into getting vaccinated under threat of losing their job and being locked out of society. It was claimed that this was the only way to ‘get back to normal’ and eliminate the virus. Again, just the opposite occurred. So called cases and deaths rose (many may actually be vaccine injuries because people who have been vaccinated will inevitably test positive for covid).

Now, the lies are shifting again. Instead of shouting at Victorians who refuse to comply with the vaccination edicts, Andrews is declaring that the pandemic is all but over, beaming at reporters as if he has achieved a great success.

Look a little closer, however, and the dishonesty is clear enough. Andrews said Victoria will move to “essentially no covid rules”. What he neglected to mention is that this only applies to the vaccinated. The unvaccinated continue to be locked out of the work force and venues; the medical apartheid remains.

The Andrews government slyly introduced booster mandates despite saying it would not. Andrews had previously claimed that he would not be imposing booster mandates because it would be “impractical.” He was, of course, not to be trusted. The Victorian government is already mandating boosters for many sectors, and Andrews is likely to expand it to other industries.

In one way these are the more conventional lies that politicians tell – saying one thing and doing another. Aware that elections are coming, the politicians are softening their tyrannical messaging. But it underlines the unforgettable lesson of the last two years. Whatever the government says, including about quarantine camps, should never be trusted.

Andrews has arrogated to himself the powers of a despot with the passing of The Public Health and Wellbeing Amendment (Pandemic Management) Bill. He is able to declare a state of emergency whenever he wants. The bought and paid for fact checkers like to claim that the courts will check any abuses, but the judiciary has shown itself to be wholly toothless. He has set himself up as a dictator.

Australia’s democracy has been deeply damaged, and only concerted political action to oppose the tyranny will save it. Even if that means ending up going to a quarantine camp to be ‘re-educated’ – cleansed of unacceptable ideas. 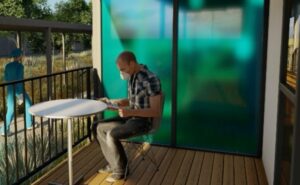 PrevPreviousAustralia’s Record-Breaking Wave of C0VID-19 Sees Fully Vaxxinated Account for 9 in Every 10 ICU Admissions & 4 in Every 5 Deaths
NextDr. Ben Marble – People Have Been Vaxxinated With Slow Acting Lethal PoisonNext