If you believe what the mainstream media are reporting, Australian’s are overwhelmingly in favour of the decision to kick Novak Djokovic out of the country. 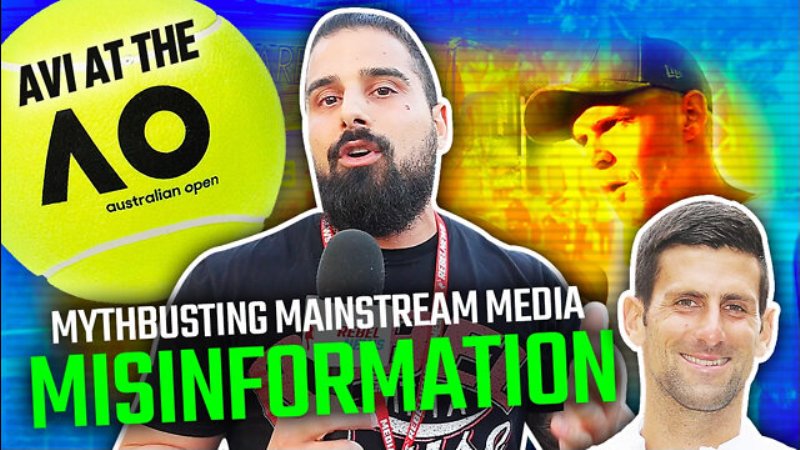 justjoshin78
Deported for thoughtcrimes.
Orwell was a prophet.

BlasianBabies2020
Don’t worry, 4 players in the Australian open have had health problems so far. Novak Djokovic might win by default, simply for being the healthiest.

SteveFrench11
This interview once again conforms, many Australians are void of any form of critical thinking, and the world governments are running scared; your not alone Australia sad to say.

persius09
You make an interesting point. If the average Aussie is brainless then that means their “police” force is an entire league of their own. Stupid vs. Stupid 2.0

McSeoighe
Scary to see so many young people going along with state totalitarianism. The Millennial Generation are the most ignorant, stupid generation we’ve ever had and are the ones who are going to finally give away all our freedoms.

Lizzie2325
Wow!! Excellent reporting again from Avi Yemini!! Thank you! It’s insane how severely brainwashed people have become! The media and governments are out of control with their propaganda and must be held to account!

Jaso
To think that you have to go out and explain the real reason Novak got kick out of Australia, is so embarrassing to be an Australian.
They can’t educate themselves, fools to the fake msm.

persius09
A few hours ago I had an online chat with a friend in Europe and as a complete joke I told her that the reason Novak was deported from Australia was that he said he has British ancestry linked to Royalty and he has a claim to the Throne of Australia and he has the legal right to be King. The Australian govt was terrified of losing power so they deported him. Her mouth dropped to the floor and she shouted;
“NO WAY. That’s insane. I didn’t know that.”
In other words, she believed me without any question as to what the facts were simply because I kept a straight face with her.
Next time I’ll tell her that Arnold Schwarzenegger is my Uncle and see how far I can get away with it.

PrevPreviousTherapies To Prevent Progression of C0V-19, Including Hydroxychloroquine, Azithromycin, Zinc, and Vitamin D3 With or Without Intravenous Vitamin C: An International, Multicenter, Randomized Trial
NextIs AHPRA Hiding Just How Many Medical Professionals They Are Bullying?Next