Four Killed As Light Plane Crashes Into Wetlands off Redcliffe

Four Killed As Light Plane Crashes Into Wetlands off Redcliffe

By Tony Moore and Cloe Read

One of four people, including two children, who were killed in a single-engine light plane crash on Sunday morning has been identified as the chairman of an international company.

Police divers have retrieved the bodies of four people – including two children – from the waters off Redcliffe after a single-engine light plane crashed on Sunday morning.

The coastguard at the scene of the semi-submerged plane off Redcliffe on Sunday morning.

Mr Watterson was the founder of Lincom Group, a parent company of businesses supplying the quarry, mining and forestry industries, while Mr Mocanu was an employee for the family-run business.

The company, which has customers across Australia, New Zealand, Papua New Guinea and the Pacific Islands, posted online about the tragedy.

“We are deeply saddened by the tragic loss of Roy Watterson, our chairman and founder, along with Chris Mocanu, our National Hire Fleet Coordinator and his two children,” an post from Lincom Group read.

“The loss has been deeply felt across the entire Lincom team.

“Roy established Lincom over 25 years ago and saw it grow and develop over the years.

“Roy passed on the CEO reigns to Stephen several years ago but was always around to offer advice and viewpoints.”

Mr Mocanu had been with the company for a short period, the post read, but “quickly settled in, developed several strong business relationships and made the position his own”.

“We were very privileged to work with both Roy and Chris, and we will miss them dearly.”

Others described Mr Watterson online as an “extremely generous man” who was “respected well beyond the borders of Australia.”

On Monday, investigations were still under way into the crash, which was reported by a member of the public who phoned police on Sunday, with images supplied to Brisbane Times showing the aircraft upside down.

A pilot from Fly Now Redcliffe, which operates from Redcliffe Airport, said one of his customers who was outside watching the plane told him it suffered an engine failure.

“It had an engine failure after take-off,” said the man, who asked not to be named.

“It ended up in the water … upside down. There were four occupants, and they have all deceased.”

The witness said the plane’s engine stopped soon after take-off.

“I had customers of mine out there watching. They saw the plane descend, and then they saw the crash,” the pilot said.

“That’s when they ran in and told me. They rang 000 and then, with a hand-held radio, I spoke to another aircraft that was coming in and asked them to circle overhead,” he said.

“He confirmed that the aircraft was upside down and in the water. He couldn’t see any people.” 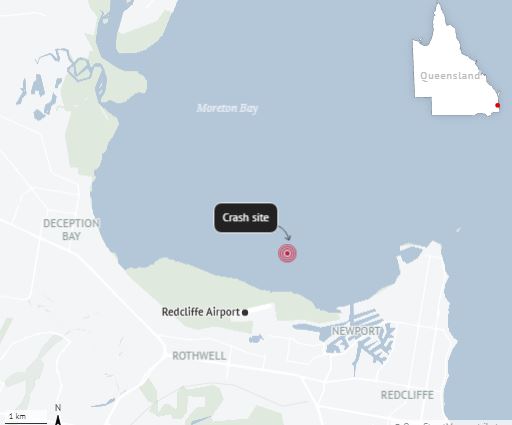 Inspector Craig White said police believed it was a joy flight and a family day out.

He said early investigations showed the pilot’s family was from Brisbane, but details of the passengers’ next of kin had not been confirmed.

“We don’t believe the pilot was related to the other passengers,” Inspector White said.

“This is a tragic accident in the lead-up to Christmas.

“This is the last thing that any family needs to go through at this, or any, time of year.”

The Fly Now Redcliffe pilot said the Rockwell Commander 114 landed in the water just north of the runway.

“On the northern side of the airport there is a swamp. Where the swamp runs out, and the water is, it’s just there,” he said.

Air Transport Safety Bureau chief commissioner Angus Mitchell said a preliminary report into the accident would be completed in “six to eight months”.

Commissioner Mitchell said a second ATSB investigation team would arrive from Canberra on Monday to examine any communication with flight towers, any flight recorders that could be detected, and the wreckage.

Removing the plane’s wreckage from the water was being hampered by the low tide and mud on Sunday afternoon.

PrevPreviousLike Many Mandated Gold Coast Businesses, Dan From @noego_coffee_co Was Visited by the Boys in Blue
NextThe Queensland Government’s Vaxxine Mandates Are Going To Cause Great Hardship Because They Lack the Flexibility To Accommodate the Health and Conscientious Needs of IndividualsNext