One Nation leader Senator Pauline Hanson will today introduce legislation making it unlawful to discriminate against Australians who exercise their right to choose not to be vaccinated against COVID-19.

“I’m bringing this legislation to the Senate because I see no other alternative for halting the pandemic of discrimination that has been unleashed in Australia against individuals who don’t get vaccinated against COVID-19, regardless of the reason why they don’t,” Senator Hanson said.

“These individuals are Australians just like the rest of us but they’re demonised by governments and scorned at by compliant media. They face a bleak future in which they are treated as second-class citizens, not allowed to earn a living or cross a state border to be reunited with their families. Many have already had their livelihoods taken from them for standing for the right to choose. There’s no protection even for those people who can’t get vaccinated for medical reasons. They face unacceptable discrimination too.

“In the Northern Territory for example, anyone with a job involving public interaction has been ordered to get the jabs by 13 November or lose their job and cop a $5000 fine. It’s pure discrimination and naked coercion in a jurisdiction which has had just over 200 cases and not one single death from COVID-19.

“All of this discrimination sends a clear message: the rights of the individual will be protected only so long as they do not conflict with the state. There is nothing – not even a global pandemic – more dangerous to a free society. Australia is a democracy, not a totalitarian state or communist dictatorship.

“One Nation is not anti-vaccine. One Nation is pro-choice. Personally, I will not allow myself to be bullied, threatened or coerced into a medical procedure I’ve decided against. That’s my choice. I’m fighting for every Australian’s right to make their own choice. I’m standing against the bullying, threats and coercion which have no place in a free society like ours.”

Senator Hanson said the legislation was also a necessary response to Prime Minister Scott Morrison’s profound lack of leadership during the pandemic.

“State premiers are walking all over the Prime Minister and his so-called national plan, locking down communities at the whiff of a new case and refusing to commit to the open borders that are the constitutional right of every Australian citizen,” she said.

“Scott Morrison is impotent in preventing it. He’s too gutless to admit the Constitution forbids the Commonwealth from authorising civil conscription with respect to medical services, so he lets the states and territories trample all over our right to choose, take away our jobs, separate our families and isolate our communities.

“Scott Morrison is clearly not fit to lead this country if he won’t stand up for Australians’ right to choose.” 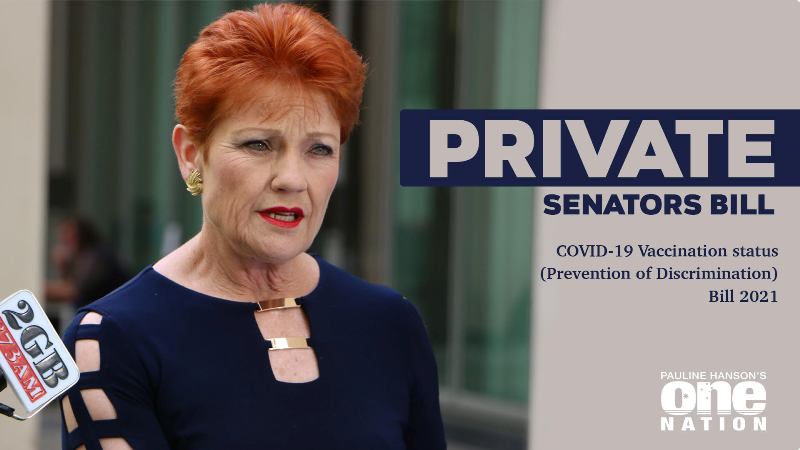 Suzanne Thompson
I am fully vaccinated but believe we all have freedom of choice. I do not believe we should be placing these rules on the unvaccinated. It will be on them should they get sick. All freedoms and rights taken away, the constant threats by our government is pitiful. Behind you.

Leanne Chilcott
Thank you Pauline it’s about time someone at the guts to stand up and say it like it is. You have my vote!

Glen Cookson
One Nation again fighting for people and their rights!
Go One Nation!

Tania Senko
Thank you Pauline, between this and fighting for Parental Alienation to be made an offence, you’re making my life a lot brighter

Karen Wills
Thank you Pauline.
Scott M is doing exactly what he has planned to do, that way the premiers do the dirty work and he can say “ it wasn’t me” come election time.
Scott’s not weak, he’s playing a very sly game under the UN control.

Diane Hudson – McDougall
Good luck Pauline. You got my vote. Everyone has the right to choose what goes into their body without discrimination.

Sage Clarey
Thank you Pauline.
I had my first jab, reacted straight away, ended up in hospital and am now being treated for pericarditis. I don’t want to be pressured further to have another jab, who knows what will happen.

Rebecca Nettle
I believe that everyone has a right to choose. I think be my guest if you want to get sick and possibly die.