You have to ask yourself this morning what the world must be thinking of our country.

It was only a matter of weeks ago that police and defence personnel were manning the streets of Sydney in anticipation of protests.

As I said at the time, if a democratic government requires police and defence personnel to defend its policies, then it might be time to think about the policies themselves and how they are being sold to the public.

In NSW, the public had legitimate concerns about mass lockdowns, where people, doubly vaccinated, were locked down with everybody else; in fact, millions were locked down on the basis of “health advice” that has never been provided, advice shrouded in secrecy and it still is.

I warned months ago, perhaps the first person to do so, that the vaccination debate had become so toxic, so badly presented, so devoid of consistent argument, that an ideological battle, at least, was inevitable between those who wanted vaccination and those who, for whatever reason, chose not to.

Unfortunately, yesterday, that ideological battle translated into ugly and unacceptable violence in Melbourne, the pictures of which have gone around the world, which must be asking what sort of country we are?

There was a mix of construction workers, tradespeople, unionists and your usual activists; and police again were placed on the frontline, by government.

Lockdowns plus vaccinations created what was seen yesterday.

It is easy to understand the suffering of millions. A mental health crisis is overwhelming our young people; businesses are struggling to survive having been locked up for months on health orders no one has seen; but Daniel Andrews appeared every day during Melbourne’s 112-day second lockdown.

He was nowhere to be seen yesterday.

What is the real issue here?

There is no point in leaving critical concerns unresolved, in the too-hard basket. At the heart of all of this is the federal government’s COVID-19 vaccination policy which says, simply, that vaccination should be free and voluntary.

This led the ACTU and the Business Council of Australia to rightly argue that, “Employers and unions recognise that for a small number of high-risk workplaces, there may be a need for all workers, in a workplace, to be vaccinated to protect community health and safety… These are serious decisions that should not be left to individual employers and should only be made following public health advice based on risk and medical evidence.”

That is what I warned about months ago.

Where does the government statement about vaccination being “free and voluntary” and the ACTU and Business Council of Australia arguing that these decisions “should not be left to individual employers”.

Government has closed the whole of the construction industry in Victoria, which will cost an estimated $455 million a day.

Nothing can condone these protests or the violence or the vandalism or the extremism. The world sees a Victoria on the verge of chaos. But surely if the national government says that vaccinations should be “free and voluntary”, would an ordinary worker wonder what that means?

Again, the real crisis is in leadership.

If government believes that coronavirus is such a health threat, then government, not employers, should be mandating that vaccinations are compulsory and a system to manage legitimate exemptions, with consultation with the best medical minds, should be put in place.

The kind of chaos and violence we saw yesterday was predictable. It is a classic case of government wanting to run away from its responsibility and, when that happens, mayhem ensues.

In the end, our image around the world is appallingly damaged. 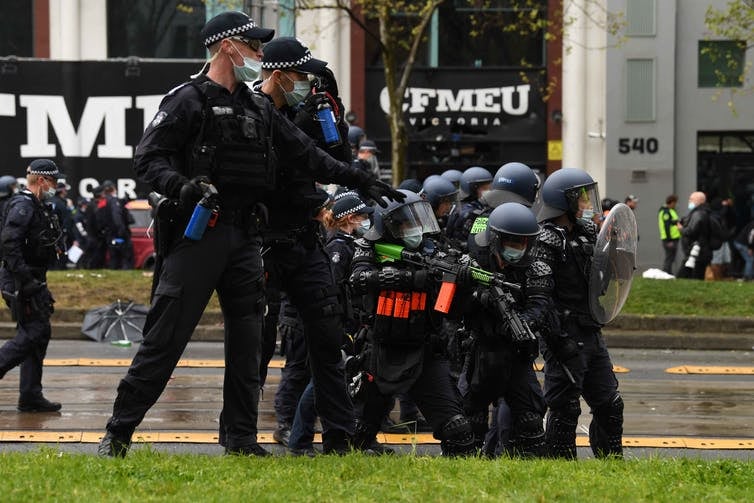 Jess Bray
I’ll tell you what. They’ve been to busy living life and holidaying all over the world together to worry about Australia. However the people I’ve spoken to in places INCLUDING BRAZIL; where apparently they were hit so hard… they send messages of prayer and are “so sorry we are going through this”. If that isn’t a wake up call I don’t know what is

Raylene Monkley
Morrison said the Govt. Would not Mandate . But then he added Businesses could make the decision if they wanted Vaccinated people working for them ! In other words Morrison passed the buck as he knew he would suffer at the Ballot Box ! Are all of Govt. Employees Vaccinated ? After all they are supposed to work for us! Good enough for everyone even of they do not want it, good enough for them ! Or do THEY have a choice????

Graham Nadia Teasdale
I agree the leaders need to step up and lead
Leadership is about making decisions to empower the people not tear them down.
We are in trouble.
Keep up your fantastic reporting Alan Jones ???

Hugo Fernández
Nothing can condone these protests or the violence or the vandalism or the extremism? What extremism? You may be talking about the tyranny and their taxpayers-paid thugs.

Kaye Hatrick
Alan Jones where do you get your information from? I watched the live stream of the March on YouTube and I can tell you it was far from violent, these people have had enough they have no job, what do you expect them to do? They have families to feed, rent to pay, bills to pay and all while the politicians do nothing and still get their $8K a week. Pull your head in Alan and stand with the people, if they didn’t protest nothing would get done..

Wayne Herd
When the government only listens to those who agree with them, it’s no longer a democracy.
Civil war is coming, that much is clear from current events, unless they start listening to people.

Jordan Crawley
No sorry. The people decide what they do and don’t do. Not the government. The end.

Nick Berry
Your image is not damaged, in fact there are many of us globally who support the stand the local construction industry has taken against tyranny.

Linda Moullae
Sorry Allan, but No Government has the right ot mandate ANYTHING that goes into your body. Apart from that, well said