Murdoch Media Demonises Australians Walking for Their Freedom in Melbourne

Murdoch Media Demonises Australians Walking for Their Freedom in Melbourne

Darren, see the article below in the Murdoch media, which seeks to demonise the largely peaceful protestors in Melbourne yesterday, many of whom are likely to be CFMEU members.

This is despicable reporting by the deeply conflicted Murdoch media… News Corp Australia is a corporate partner with the Murdoch Children’s Research Institute, which is involved in vaccine research, including Covid-19 vaccine research with the Doherty Institute. It’s ‘modelling’ produced by the Doherty Institute (April 2020 and August 2021) that has kept Australians under restrictions for the past 19 months, ‘until the vaccine is ready’. The Murdoch media – The Australian, the tabloids, Sky News – pumps out a torrent of biased media supporting the Morrison and State Governments’ covid-19 injection rollout, without disclosing its serious conflict of interest, i.e. that it’s associated with covid-19 vaccine research.

I watched some of the march/protest via ‘Real Rukshan’ yesterday, there’s six hours of footage here: https://www.facebook.com/watch/live/?v=572417687290324&ref=watch_permalink

It brings tears to my eyes to see these Australians out there, peacefully walking along for all of us, walking to take back our freedom.

If there was any aggression I’d question if it was incited by Daniel Andrews’ police force or other malevolent actors? These ‘public order response officers’ in Victoria – do they feel any shame for what they are a part of, the suppression of the freedom of the people?

And see how this peaceful march over six hours is characterised in the Murdoch media, the article on The Australian below…

The Murdoch media, and other mainstream media in Australia, including Nine Entertainment, Seven West Media, Ten Network Holdings, the ABC and SBS, is a traitor to the Australian people, the mainstream media has been grossly misleading us for the past 19 months of this grossly disproportionate and ill-targeted covid-19 response – what a debacle!

And now, to top things off, the CFMEU turns on its own members: “CFMEU’s John Setka says members taking part in Melbourne protests ‘not welcome in our industry””, as reported on the ABC today.

Wow, John Setka, what a traitor he is to the CFMEU members… And add Anthony Albanese and Bill Shorten to the list of traitors too…

I’m circulating this email to others. 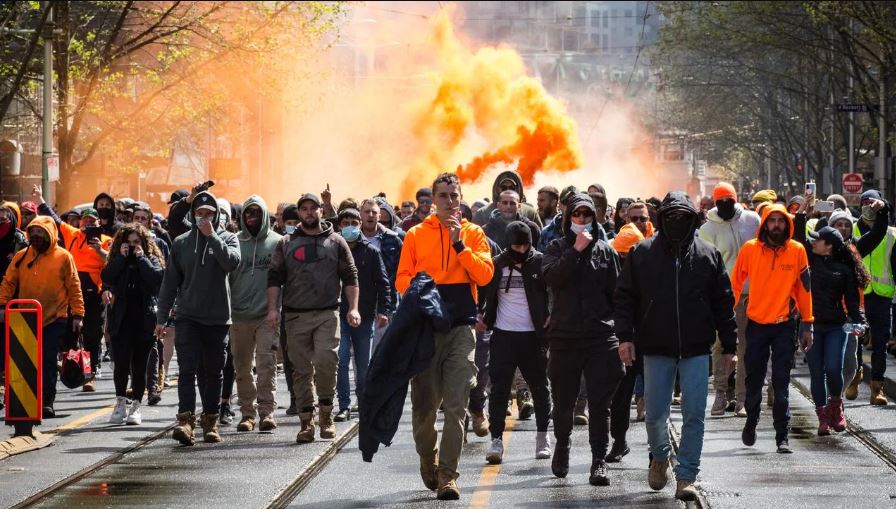 Protesters march through the streets of Melbourne on Tuesday.

Violent protesters hijacked Melbourne’s gateway bridge and controlled the city for hours, throwing missiles at police, smashing their cars and assaulting onlookers over the shutdown of the state’s $22bn construction industry and mandated Covid-19 vaccinations.

The estimated 2000 protesters – a mix of construction workers, tradesmen, unionists and radical activists – ran police off their feet, with more violence expected on Wednesday and later in the week.

Victoria Police Chief Commissioner Shane Patton late on Tuesday condemned the protesters as cowards, and said they would face new tactics on Wednesday.

“My message is really clear – stay away. We will be out in force again. Stay home, I implore you,” Mr Patton said.

Police were outfoxed on Tuesday by a chaotic strategy that involved brisk walking down virtually every major street in the CBD for several hours, making it difficult for police to regroup. 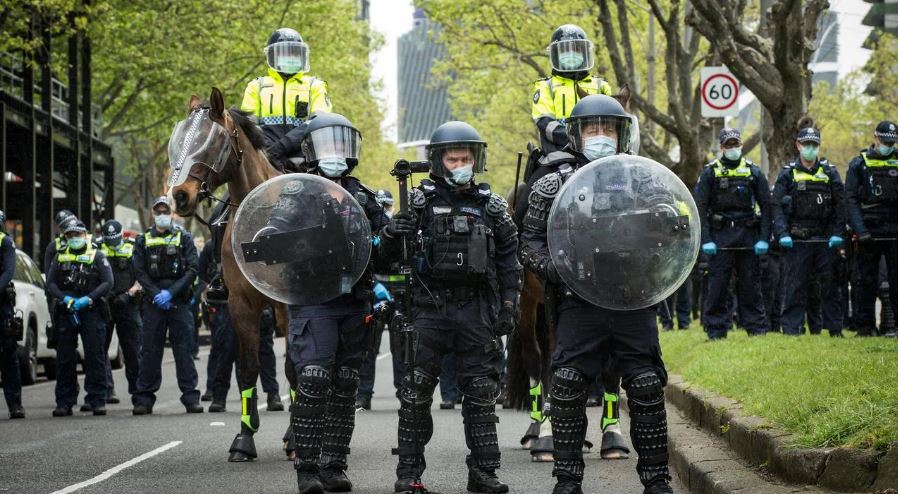 A heavy police presence is seen on Elizabeth Street outside the CFMEU office.

With police off guard after a CBD stand-off, the protest then led to rare scenes, with the West Gate Bridge and freeway lanes blocked for about two hours as hundreds of people – many wearing high vis – commandeered the critical thoroughfare, leading to inner-city gridlock.

The Andrews government’s construction shutdown because of hundreds of Covid-19 cases on building sites and poor compliance among workers will cost the national economy close to $1bn over two weeks and leave nearly 300,000 workers stood down.

The government also cited the rioting outside the CFMEU Victorian headquarters on Monday as a reason for shutting the sector, which had previously received preferential treatment over other industries during lockdowns.

On the West Gate Bridge, protesters threw objects at passing cars, including rocks and bottles, and hurled abuse when people tried to move. At one point, dozens of protesters charged trapped police cars, apparently smashing at least one window, prompting public order response officers to angrily strike back.

In the mid afternoon, protesters on the West Gate Bridge harassed some drivers but were greeted with beeping horns by others in a state that has endured one of the world’s longest lockdowns. Protesters regularly threw rocks and bottles at police and their horses over nearly eight hours of chaos.

Victorian Premier Daniel Andrews was criticised by the opposition for failing to appear publicly as the anarchy unfolded, starting at the trashed CFMEU headquarters at 10am.

“This is time for political leadership. We do not support violence on our streets,” new Victorian Liberal leader Matthew Guy said.

After being absent all day, Mr Andrews released a statement late on Tuesday condemning the violence: “Acts of violence and disruption won’t result in one less case of Covid – in fact it only helps the virus to spread. 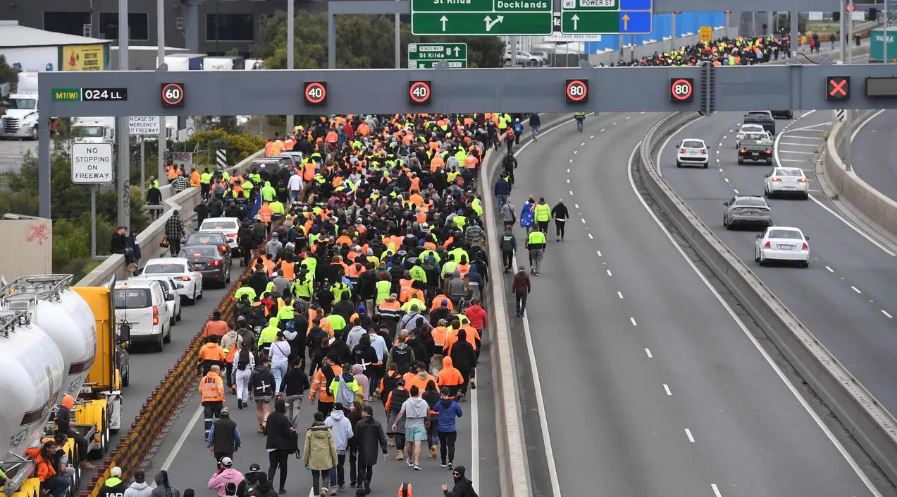 On the West Gate Bridge, protesters threw objects at passing cars, including rocks and bottles, and hurled abuse when people tried to move.

Protesters brandished signs including “Setka the sellout” and “f..k u Andrews” while others paraded flags supporting former US president Donald Trump.

The CFMEU, ACTU and the nurses’ federation condemned the protests and distanced themselves from the demonstrators, who they labelled far-right extremists and anti-vaxxers.

Roughly half the protesters appeared to be construction or manual workers, many wearing union clothing promoting the CFMEU, the Electrical Trades Union and the plumbers’ union.

Protester Stephen Horvat, a CFMEU member from Doncaster in Melbourne’s east, said he joined the rally to protest peacefully about the push to ban workers who were not fully vaccinated.

“We want to make the point that you can’t push people into medical tyranny,” he said.

Sharon McGrath, owner of Bianco Beauty Skin Body in outer suburban Caroline Springs, said she was protesting against forced vaccinations and the crippling effect of lockdowns. “We are cooked. (Vaccination) has to be our choice,” she said.

It came on a day when Victoria recorded 603 new cases, bringing to 6000 the number of active coronavirus cases in the state.

There were 337 cases linked to 154 construction worksites recorded between August 5 and September 20. Among these cases, 239 cases were linked to sites in metropolitan Melbourne. Nine of these cases live in regional Victoria. Seven construction sites are each linked to five or more cases.

When the protesters turned back towards the CBD, a distance of about 6km from the West Gate, the marchers were confronted on the inbound lanes by about 200 riot police, who made several arrests. 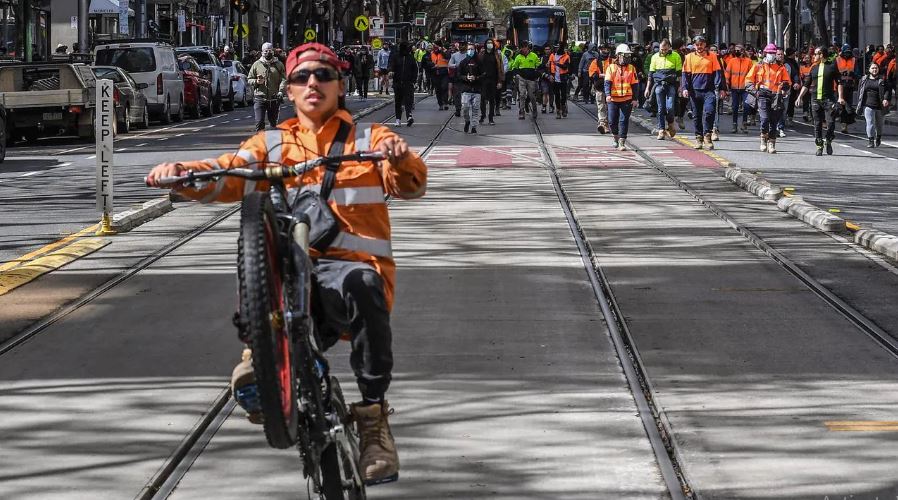 Victoria Industrial Relations Minister Tim Pallas said the government had been forced to shut down the construction industry for two weeks because of appalling behaviour.

During earlier protests, Seven News reporter Paul Dowsley was attacked and had a drink can thrown at his head while he was reporting live.

He also had urine sprayed on him, according to reports. “I’ve been grabbed around the neck today, I’ve had urine tipped on me, and now I’ve had a can of energy drink thrown on me,” he said.

Victoria Industrial Relations Minister Tim Pallas said the government had been forced to shut down the construction industry for two weeks because of appalling behaviour on some sites and at Monday’s CFMEU riot.

“We put the industry on notice just a week ago – we have seen appalling behaviour on-site and on our streets, and now we’re acting decisively and without hesitation,” he said.

CFMEU Victorian secretary John Setka accused the protesters who attacked his city office on Monday of being made up of mostly right-wing extremists but conceded some unionists were in the group.

The office has been boarded up and one of the protesters left behind a bunch of flowers in what amounts to an ominous warning for the union.

“There is a network of hard-right man baby Nazis, people who just want to cause trouble,” he said. “These man babies, they want to complain about the vaccination and they deserve to get the full force of everything that’s coming their way.”

PrevPreviousAustralia’s Lockdown Restrictions Have Nothing To Do With the BS-19 Virus and Everything To Do With Control, and We Can Prove It…
NextMelbourne Residents SOS for Help To Be Saved From Evil Dictator Dan AndrewsNext

ANR Founder Says, “This is the Strategy the Globalists Use. They Infiltrate Communities and then Push their Mental Illness of Perversion Disguised as an Ideology”

ANR Founder Says, “This is the Strategy the Globalists Use.

ANR Founder Says,“This is the Strategy the Globalists Use. They

Greta Thunberg and a Group of 600 Others are Suing

Greta Thunberg and a Group of 600 Others are Suing