Jens Stoltenberg, the Secretary General of NATO, has warned Russia that if Moscow’s attack against Ukraine spills over into other European nations who are member states of NATO, it will force the intergovernmental military alliance to take counteraction.

“For NATO Allies, we provide the absolute security guarantees under the Washington Treaty Article 5. An attack on one will be regarded as an attack on all,” Stoltenberg said in a Feb. 25 press conference.

“And we are clear on this distinction because it is important to make sure that we don’t have an even bigger crisis in Europe where Russia challenge, or is threatening, or attacking any NATO allied country.”

In addition to military attacks, Ukraine has also been hit with cyberattacks from Russia. On Feb. 23, the websites of several government departments and Ukrainian banks became inaccessible. Multiple Ukrainian organizations were hit with a new wiper attack that deleted data on infected machines.

One of the primary aims of NATO, when it was founded in 1949, was to create a pact of mutual assistance to counter the potential risk posed by the Soviet Union. According to Article 5, if any NATO ally becomes a victim of an armed attack, every member state of the alliance will combine and engage in actions to assist the victim against the aggressor.

“Any such armed attack and all measures taken as a result thereof shall immediately be reported to the Security Council. Such measures shall be terminated when the Security Council has taken the measures necessary to restore and maintain international peace and security,” according to Article 5.

Article 5 can only be invoked if Russia directly attacks any NATO member. As Ukraine is not a NATO member, the organization cannot take action. Ukraine has applied for NATO membership but is yet to be approved. Russia has vehemently opposed Ukraine joining NATO and had made it a condition for withdrawing troops from the Ukrainian border before the war.

At present, NATO has decided to make “significant additional defensive deployment” of its troops to Europe’s eastern nations who are part of the organization, a joint statement by 30 leaders of NATO said on Feb. 25. They blamed Moscow for its “barrage of lies,” insisting that their commitment to Article 5 is “iron-clad.”

In the UK, James Heappey, Parliamentary Under-Secretary of State for the Armed Forces, said that the country plans to deploy armed forces to Estonia earlier than planned. The UK has put 1,000 troop members on standby to support countries like Poland, Slovakia, Hungary, and Romania as they deal with refugees from Ukraine. Heappey also warned against any meeting between NATO and Russian troops.

“We must all in this house be clear that British and NATO troops should not, must not, play an active role in Ukraine,” Heappey said in the British parliament. “We must all be clear what the risk of miscalculation could be and how existential that could very quickly become if people miscalculate and things escalate unnecessarily.” 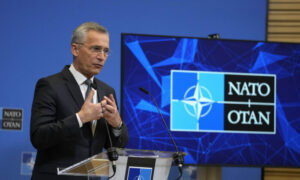 PrevPreviousSchools: How To Protect Your Children
NextEU ‘Commits’ to Cutting Russian Banks Off From Swift Over Ukraine InvasionNext