In a wide-ranging interview with Emeritus Law Professor David Flint, Kelly, who last year resigned from the Liberal Party to join the UAP, said Australian politics was in “disarray” and that the current two-party political system was “broken.”

“If you were to have a clean piece of paper on how to draw up a political system—it’d be pretty hard to go past the Westminster system, it’s as good as it gets,” he told Flint in an episode of Australia Calling.

“But the problem we’ve got is we’re dominated by two political parties that have been able to almost create a duopoly between themselves, and both parties are heavily factionalised, so whoever is going to get started has to almost sign a blood allegiance to one of the factions and simply do as they’re told,” he said.

“They’re basically told how to vote, what position to take, how to get elected, and so much of politics is spent … doing factional deals with each other,” he added, saying less effort was being put into governing the country and developing good policy.

“Factionalism is undermining the traditional values of our Westminster system,” he said, noting it was a “cancer on our democracy.”

Kelly will contest the seat of Hughes at the next federal election—due before May 2022—against his former party.

Factions differ markedly in how they see the political system operating, yet at the same time, they are a major factor behind which MPs get elevated to Cabinet, how policies are formulated, and who is preselected to stand in elections.

The trend is nationwide and prevalent across the federal and state political arena.

The Liberal Party, for example, has had to contend with an increasing divergence away from its traditional values around classical liberalism, the free market, and social conservatism.

Meanwhile, the ALP has experienced a more overt struggle to balance the interests of its traditional working-class voting base and newer white-collar, inner-city voters.

The clash played out during the 2019 federal election where the ALP nearly lost control of the mining electorate, Hunter, a long-running Labor stronghold.

Kelly called on MPs to instead be allowed—and have the courage—to make their own decisions, even if they don’t always follow the party line.

“I think if you are using your own judgement, you are representing the interests of your electorate. You are not there as a political person to tick a box,” he said. “And that’s how a Westminster democracy was set up to work.”

Decentralise for the Sake of Society

The UAP candidate also called for the decentralisation of Australia’s cities away from major population centres noting that current trends will alter the fabric of society.

For example, young adults who are increasingly concentrated in cities like Sydney and Melbourne are being priced out of the real estate market.

“If you take away entire generations dream of homeownership, it will fundamentally change the structure of the society,” Kelly said. “If you haven’t got a mortgage to pay, it changes the mentality [of young Australians, who then ask themselves]: ‘Why bother saving? Just go party all weekend. I don’t get to own this one piece of the world that is mine.’”

“It’s like the great socialist mentality we’re getting out of Europe: ‘You own nothing, and you will be happy,’” Kelly said in reference to the motto of the recent World Economic Forum meeting in Davos, Switzerland.

Housing prices in Australia’s largest cities have seen a dramatic surge driven largely by the fallout of COVID-19 management policies. Sydney’s current median housing price is AU$1.1 million (US$790,000), while Melbourne’s is AU$795,000.

“You get past Campbelltown [in southwest Sydney], and there are thousands of acres of open land,” Kelly said. “And then you come to the first suburbs of northern Canberra—there are blocks of land built on 300 square metres. Tiny blocks of land.”

He said state and federal governments needed to continue moving departments into regional centres to spread out development and employment opportunities.

“You can sell your property in Sydney for $1.5 million, and you can buy a luxury pad for a million dollars, with half a million in your pocket. I think people would jump at that opportunity,” he said.

“Anything that decentralises power and control, I think, is good for our country.” 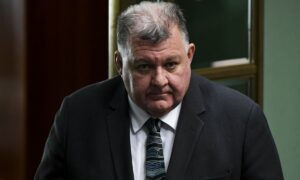