Puppet President Joe Biden plans to reduce inflation in the US, by wait for it – printing and spending hundreds of billions- isn’t that what created inflation? 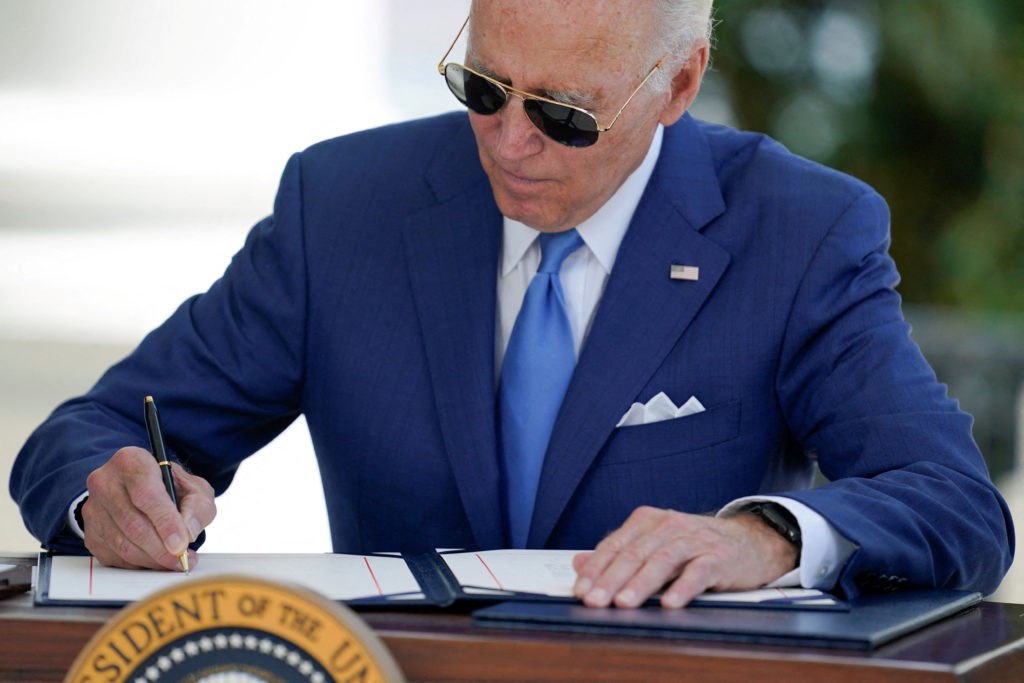 WASHINGTON (AP) — President Joe Biden signed Democrats’ landmark climate change and health care bill into law on Tuesday, delivering what he has called the “final piece” of his pared-down domestic agenda, as he aims to boost his party’s standing with voters less than three months before the midterm elections.

The legislation includes the most substantial federal investment in history to fight climate change — some $375 billion over the decade — and would cap prescription drug costs at $2,000 out-of-pocket annually for Medicare recipients. It also would help an estimated 13 million Americans pay for health care insurance by extending subsidies provided during the coronavirus pandemic.

The measure is paid for by new taxes on large companies and stepped-up IRS enforcement of wealthy individuals and entities, with additional funds going to reduce the federal deficit.

In a triumphant signing event at the White House, Biden pointed to the law as proof that democracy — no matter how long or messy the process — can still deliver for voters in America as he road-tested a line he will likely repeat later this fall ahead of the midterms: “The American people won, and the special interests lost.”

“In this historic moment, Democrats sided with the American people, and every single Republican in the Congress sided with the special interests in this vote,” Biden said, repeatedly seizing on the contrast between his party and the GOP. “Every single one.”

The House on Friday approved the measure on a party-line 220-207 vote. It passed the Senate days earlier with Vice President Kamala Harris breaking a 50-50 tie in that chamber.

“In normal times, getting these bills done would be a huge achievement,” Senate Majority Leader Chuck Schumer, D-N.Y., said during the White House ceremony. “But to do it now, with only 50 Democratic votes in the Senate, over an intransigent Republican minority, is nothing short of amazing.”

Biden signed the bill into law during a small ceremony in the State Dining Room of the White House, sandwiched between his return from a six-day beachside vacation in South Carolina and his departure for his home in Wilmington, Delaware. He plans to hold a larger “celebration” for the legislation on Sept. 6 once lawmakers return to Washington.

The signing caps a spurt of legislative productivity for Biden and Congress, who in three months have approved legislation on veterans’ benefits, the semiconductor industry and gun checks for young buyers. The president and lawmakers have also responded to Russia’s invasion of Ukraine and overwhelmingly supported NATO membership for Sweden and Finland.

With Biden’s approval rating lagging, Democrats are hoping that the string of successes will jump-start their chances of maintaining control in Washington in the November midterms. The 79-year-old president aims to restore his own standing with voters as he contemplates a reelection bid.

The White House announced Monday that it was going to deploy Biden and members of his Cabinet on a “Building a Better America Tour” to promote the recent victories. One of Biden’s trips will be to Ohio, where he’ll view the groundbreaking of a semiconductor plant that will benefit from the recent law to bolster production of such computer chips. He will also stop in Pennsylvania to promote his administration’s plan for safer communities, a visit that had been planned the same day he tested positive for COVID-19 last month.

“In the coming weeks, the President will host a Cabinet meeting focused on implementing the Inflation Reduction Act, will travel across the country to highlight how the bill will help the American people, and will host an event to celebrate the enactment of the bill at the White House on September 6th,” the White House said in a statement.

Republicans say the legislation’s new business taxes will increase prices, worsening the nation’s bout with its highest inflation since 1981. Though Democrats have labeled the measure the Inflation Reduction Act, nonpartisan analysts say it will have a barely perceptible impact on prices.

Senate Minority Whip John Thune, R-S.D., on Tuesday continued those same criticisms, although he acknowledged there would be “benefit” through extensions on tax credits for renewable energy projects like solar and wind.

“I think it’s too much spending, too much taxing, and in my view wrong priorities, and a super-charged, super-sized IRS that is going to be going after a lot of not just high-income taxpayers but a lot of mid-income taxpayers,” said Thune, speaking at a Chamber of Commerce event in Sioux Falls. The administration has disputed that anyone but high earners will face increased tax scrutiny, with Treasury Secretary Janet Yellen directing the tax agency to focus solely on businesses and people earning more than $400,000 per year for the new audits.

The measure is a slimmed-down version of the more ambitious plan to supercharge environment and social programs that Biden and his party unveiled early last year.

During the signing event, Biden addressed Manchin, who struck the critical deal with Schumer on the package last month, saying, “Joe, I never had a doubt” as the crowd chuckled.

Though the law is considerably smaller than their initial ambitions, Biden and Democrats are hailing the legislation as a once-in-a-generation investment in addressing the long-term effects of climate change, as well as drought in the nation’s West.

Another $64 billion would help 13 million people pay premiums over the next three years for privately bought health insurance under the Affordable Care Act. Medicare would gain the power to negotiate its costs for pharmaceuticals, initially in 2026 for only 10 drugs. Medicare beneficiaries’ out-of-pocket prescription costs would be limited to $2,000 annually starting in 2025, and beginning next year would pay no more than $35 monthly for insulin, the costly diabetes drug.

Rep. Jim Clyburn, D-S.C., a powerful political ally to Biden, noted during the White House ceremony that his late wife, Emily, who battled diabetes for three decades, would be “beyond joy” if she were alive today because of the insulin cap.

“Many seem surprised at your successes,” Clyburn told Biden. “I am not. I know you.”

The Inflation Reduction Act signed into law by US President Joe Biden on Tuesday will saddle middle-class Americans with about $20 billion in added taxes over the coming decade, the Congressional Budget Office has revealed.

While Biden promised during his electoral campaign not to raise taxes on the middle class, the Senate voted down an amendment to the bill that would have protected Americans making under $400,000 from increased scrutiny by the Internal Revenue Service. The House approved the Inflation Reduction Act on Friday. The legislation passed both houses of Congress along party lines, with zero Republican support.

The bill also sets aside $80 billion to hire 87,000 IRS agents to collect those new taxes. While the Biden administration pitched the move as an effort to get rich Americans to pay their fair share, the CBO’s evaluation and the Joint Committee on Taxation suggest the new agents will be primarily tasked with extracting funds from small business owners and middle-class Americans.

The Treasury Department has insisted this is not the case, telling Time Magazine that “it is wholly inaccurate to describe any of these resources as being about increasing audit scrutiny of the middle class or small businesses.” However, Treasury Secretary Janet Yellen instructed the IRS commissioner last week to ensure that “any additional resources…shall not be used to increase the share of small businesses or households below the $400,000 threshold that are audited relative to historical levels,” meaning middle-income Americans will indeed face more audits – they’ll just be proportional.

The IRS currently employs about 78,000 people, meaning the new hires could more than double the size of the agency. However, the Treasury Department claims many of the new appointments are intended to replace employees who are about to retire, claiming the agency’s ranks will only grow by 30,000.

A job posting from the IRS specifying agents must “carry a firearm and be willing to use deadly force if necessary” raised eyebrows across the internet. The listing was later edited to remove the part about “deadly force,” though screenshots of the original remain available on social media.

Inflation has reached a 40-year high under the Biden administration, hitting 8.6% in May. While the president has blamed Russian President Vladimir Putin and the Covid-19 pandemic for the country’s financial woes, his political opponents have pointed to his “reckless” spending as the primary reason for the economy’s downward spiral. The president has passed multiple trillion-dollar-plus spending packages since taking office, though his crowning initiative, the $3 trillion-plus Build Back Better program, perished for lack of support within his own party. Parts of it have been recycled into the current bill.

Despite its name, the Inflation Reduction Act won’t actually lower inflation, according to numerous economic experts, including the Penn Wharton Budget Model and the CBO itself. Penn observed that the legislation’s impact on inflation would be “statistically indistinguishable from zero,” though nevertheless arguing it would yield “lower government debt, higher wages, higher total factor productivity and higher GDP,” while the CBO described its impact as “negligible.”

PrevPreviousHunt Down The Paedophile’s – Lurnpa’s Powerful Message to The Men of Australia and The World!
NextPort Macquarie West Prepoll Is Statistically Impossible. The AEC Have Some Explaining to DoNext