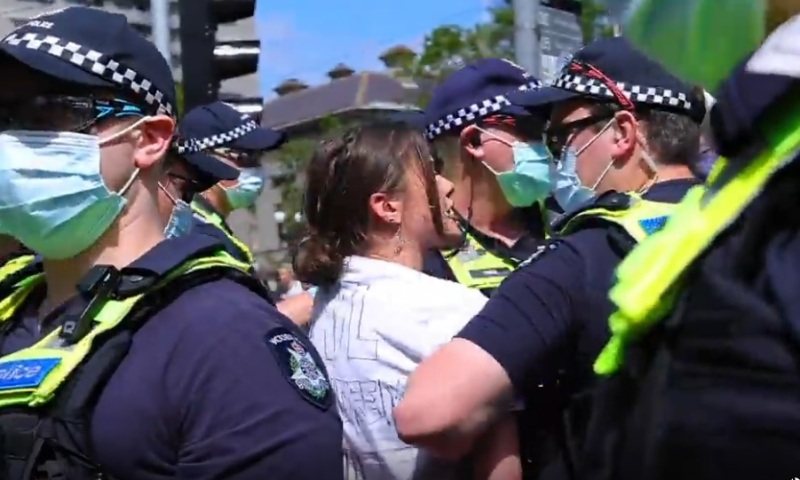 catunwrapped
I hope the girl uses this footage to report the police, disgraceful behaviour.

greatreset5.0
After vaxx mandates the cops that remain employed are not the good ones

bblondey
Police have always had too much power. They work for Dan. Dan does not care.

_marc_pope
Anyone else have a funny feeling that shit is going to get worse before they get better ?

sharrynjack
By shoving and grabbing children and old people, the stazi are showing you that nobody is safe from them. Don’t be fooled … This is deliberate and designed to make you afraid of them to deliberately provoke the men into physical violence in retaliation to give the government the excuse to invoke martial law. Take the blows people … don’t back down and don’t give in … invoke that ANZAC spirit, and resist, persist, and cry out shame shame shame on you!!! These officers have passed the time to pick a side and have clearly shown that they are against the people, not for the people. I wonder are their own families proud of them? Congrats to the ones who refused to act against the people and said NO!!? Well done guys and thank you. 👍

0nthebike
People need to stand up and steamroll those browncoats.

iraboots
They keep this sh!t up, they’ll learn that the people have the numbers and WILL step in…

georgiabalthazardasilveira
Where were all the men to stick up for her??? So unnecessary, luckily she didn’t get badly hurt!

akir3dbird
Get used to it.. now they’re about to pass the bill this is gonna be the norm.. Oz is gone to the dogs..

PrevPreviousYou Mean the “Oh My God Is a Con” Variant That Means You Have To Be a “Oh My God a Moron” Variant To Believe It
NextPowerful Scenes From Perth. So Many Have Walked Away From Their Jobs, Leaving Their Uniforms on the Steps!Next