We Have To Build a New System, Rather Than Protest About the Failing Corrupted System That No Longer Serves Us

We Have To Build a New System, Rather Than Protest About the Failing Corrupted System That No Longer Serves Us

While the focus is on stopping the mandates going through our attention is not being directed where it is being guided.

People are losing jobs because of a refusal to vax. Ppl are being extradited from society for not partaking.

Collectively we are trying to force our way back into this system of corruption by trying to stop these mandates. If they stop them and ban the vaccine, this does not change the level of corruption that is present within the very structures of society. All it does is halts that one avenue. They will form a new plan of attack. Plain and simple.

Look at the bigger picture. Remove everything you think you know about what is going on and really think about it.

These people are not LOSING their ability to work in those important fields, they are being RELEASED from where they apply them and who it really benefits. Not the community.

If all those people who have had their right to work removed formed a new system together, we could have a new community begin to take shape.
We could have houses built, medical needs met, a place for children to learn things that really matter. Collectively we could form a new system away from the old.

We are not being shunned from society. We are being helped to let it go. It hurts when you fight it.

We cannot form a new world when we still cling to elements of it for comfort and ease. It’s like a heroin addict trying to get clean but deciding the best way is to continue to inject themselves with poison. They have to go through the pain, the withdrawal, the fear, the stark image of true reality and not a hazy one that they were living in while high. They have to go through this process at some point and no amount of still keeping injecting will prevent this process from taking place if they wish to get clean.

We have to be brave. We have to walk away from all of their systems. We have to trust the collectively we CAN build a better society. We CAN live without using money. We can share resources. We can grow food that doesn’t poison us. We can use our individual gifts, training, and talents to build a better place.

Because let’s face it, that’s what we have done for centuries- it’s the ppl who have created this world on their own, but we did it in THEIR image then allowed them to strip us of any real abundance or the opportunity to enjoy it. We believed that this was good for us as they were keeping us safe… so we entered slavery. And didn’t even know.

When slavery was abolished do you know what happened? The ‘slaves’ were given an apology and told of they stayed where they were they’d be given a place to live and some money for their labours. So they thought this was a good deal. They’d lived in fear and oppression for so long that the offering of this was a welcome relief. So, they continued to work for their captors and got paid a pittance, but they did it happily. Their masters got compliant slaves and didn’t have to exert as much energy as they did in keeping them in line. They got better work out of them and all for the crumbs off their plate. This is where we are. We are on the cusp of either walking away and being willing to put in the hard work needed to build away from our captors or we can accept the crumbs they will offer and walk willingly into our cages.

See the bigger picture. Always. We are the ones who can create a better world. We don’t need their support or permission. Stop looking for answers from the very people who have hidden the truth for all our lives. 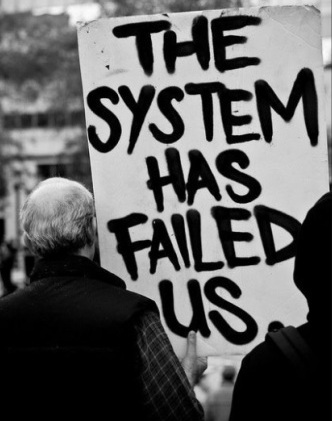