Women Can Be Strip-Searched by Trans Officers Who Were Born Male, Say Police

Women Can Be Strip-Searched by Trans Officers Who Were Born Male, Say Police

Female suspects can be strip-searched by police officers who were born male but identify as women – and could be accused of a hate crime if they object, The Mail on Sunday can reveal.

New guidelines issued to forces around the country state: ‘Chief Officers are advised to recognise the status of Transgender colleagues from the moment they transition, considered to be, the point at which they present in the gender with which they identify.

‘Thus, once a Transgender colleague has transitioned, they will search persons of the same gender as their own lived gender.’

The controversial advice, issued by the National Police Chief’s Council (NPCC) — the body representing British police chiefs — says it may be ‘advisable’ to replace the person carrying out the search if the detainee objects, but adds: ‘If the refusal is based on discriminatory views, consideration should be given for the incident [to] be recorded as a non-crime hate incident unless the circumstances amount to a recordable crime.’

The existence of the guidance, which was quietly issued in December, has only come to light following the intrepid work of Cathy Larkman, a police officer for over 30 years who rose to the rank of superintendent before retiring last year.

Mrs Larkman, 54, grew increasingly concerned with the declining trust women had in the police following a spate of scandals including the abduction and murder of Sarah Everard by a serving police officer.

Last October, responding to fears among some women that they had no option over the sex of the officer searching them, she wrote letters to the College of Policing, the Police Federation and the NPCC seeking clarification that this was not the case.

The mother-of-three, who is being supported by the Women’s Rights Network campaign group, knew that under existing law strip-searches had to be carried out by an officer of the same sex.

But she was left ‘absolutely gobsmacked’ when the NPCC finally released its new guidance to her last week.

‘The more I read it, the more shocked I was,’ she told The Mail on Sunday. ‘This is a devastating blow to women’s trust in the police. Women are not even an afterthought in this guidance — they are completely non-existent. Everything is geared towards the sensitivities of the officer doing the searching.

‘They claim they are trying to be inclusive. But this isn’t inclusive of women and it doesn’t respect their sex.’

The vexed issue of trans’ rights has dominated the news agenda over recent days.

On Monday, the Equality and Human Rights Commission watchdog insisted that gyms, hospitals and shops were legally allowed to offer single-sex services. Two days later, Boris Johnson said it was vital that women had single-sex spaces, and ‘biological males’ should not compete in female sports.

‘It tells you everything you need to know about what chief officers are thinking at the moment and where their priorities lie. Sadly, it’s not with women, she said.

‘The NPCC like to talk about reducing violence among women and girls but this just makes you think they are hollow words. There is no concern for women here whatsoever.’

A slew of horrifying revelations about misogyny within the police have emerged since Sarah Everard was abducted, raped and murdered by serving firearms officer Wayne Couzens in March last year.

The police now stands accused of ‘institutional misogyny’, in arguably its worst crisis since the Macpherson inquiry in 1999, which labelled the police ‘institutionally racist’ following the bungled inquiry into the racist murder of Stephen Lawrence.

Two police officers were jailed in December after taking photos of murdered sisters Bibaa Henry and Nicole Smallman and sharing them on Whatsapp, while an independent report published in February found that some officers joked about rape. Dozens more have been accused of sex crimes.

Mrs Larkman, who commanded over 500 officers at South Wales police, said: ‘My primary concern is women and girls out there. They need to feel like they can trust the officers who stop them, especially in light of the horrific circumstances of Sarah Everard’s murder.

‘But this policy is going to cause more problems by upsetting women and eroding trust in the police force.’

Mrs Larkman, who joined South Wales Police straight after she graduated in 1989, is particularly concerned that the guidance will undermine the progress on women’s rights within the police.

‘It was a very different world in policing back then — very male and macho,’ she said. ‘But it has made massive improvements over my career.’

An online exhibition celebrating ‘inspirational women’ in the police describes Mrs Larkman as one of the ‘standard bearers for gender equality’ and notes that she was back behind the wheel of a response car three months after giving birth to her first child.

‘Across her remarkable career, she challenged gender stereotypes to become a leading figure in South Wales Police,’ it notes. ‘A role model to so many, Cath is living proof that there is no role a woman cannot play in policing.’

That is partly why she has taken the brave decision to go public with her concerns. While it is unclear how many trans officers there are in the country, Mrs Larkman fears the new guidance will put female officers in a difficult position.

‘If they are searching biological males who self-identify as women they will be under a lot of pressure to just go along with it and keep quiet because they could be disciplined for refusing,’ she said.

She also questioned why the document places the entire emphasis for any objection on the individual being searched.

‘If an individual is nervous before authority or they are overawed by the circumstances or if there is any issue with vulnerability whatsoever, to put the emphasis on them to object is quite astonishing,’ she said.

‘To top it off, if I as a woman was being strip-searched and I said ‘no, I’m not being searched by that officer, that’s a man’ I could be written up for committing a non-crime hate incident. The document then says that, if that does happen, they should consider giving support to the officer affected, not the member of the public. It is absolutely beyond belief.’

It comes at a time when the controversial police tactic of stop and search is under severe scrutiny.

Last month, it emerged that in 2020 a black 15-year-old girl was strip-searched at a school in Hackney, East London, after officers wrongly suspected her of being in possession of cannabis.

The girl, referred to as ‘Child Q’, was menstruating at the time. A safeguarding review found that the strip search was unjustified and racism ‘was likely to have been an influencing factor’.

In light of this, Mrs Larkman said that the new searching policy is ‘tone deaf’ and ‘crass’.

‘The use of stop and search is a very difficult tactic anyway, especially in the current environment,’ she said. ‘But it’s really important in keeping communities safe if you’ve got a lot of knife crime or county lines and drugs issues. Yet it’s very difficult for officers to carry it out in the full glare of publicity so to make it even harder for them defies belief.’

Mrs Larkman reserved her ire for the police chief’s imposing these decisions on lower ranking officers.

‘The chief officers deciding these provisions are often far removed from the operational staff who are actually going to be carrying them out on the ground.

‘And I feel a big responsibility for the officers who are often forced to make difficult decisions on a rainy street corner late at night which can be very easy to criticise in the light of day. The senior officers owe them some moral courage and a level of protection but instead are letting them down enormously. This guidance threatens the integrity of the police service.’

She added: ‘We are meant to police without fear or favour and, fundamentally, consent. That’s a cornerstone of British society — policing is done with the consent of the public. And this guidance, as far as I’m concerned, completely flies in the face of that.’

Heather Binning, founder of the Women’s Rights Network and spokeswoman for the campaign Respect My Sex If You Want My X, said: ‘Cathy has done a remarkable job leading on the work that the WRN has been doing over recent months, looking at the policy and procedures of police and crime organisations.

‘Once again, we are speechless that sex and gender have been conflated, resulting in a confusing and legally discriminatory policy. Female police officers should never be put in the position where they have to search men. Similarly, a woman should never be searched by a male officer, whatever ‘identity’ he claims.’

The ‘Respect My Sex’ campaign, also backed by activists Maya Forstater and Caroline Ffiske, urges voters to grill politicians about their definition of a woman.

Last night, a spokesman for the NPCC said: ‘All searches are dealt with on a case-by-case basis after consideration by a custody sergeant based on the response of the detainee. All searches are carried out in line with the officer or staff members training and legal authority, taking into account our responsibilities under both the Equalities Act 2010 and Police and Criminal Evidence Act 1984.’ 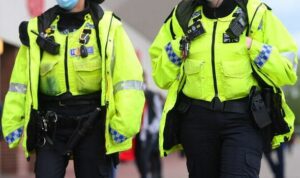